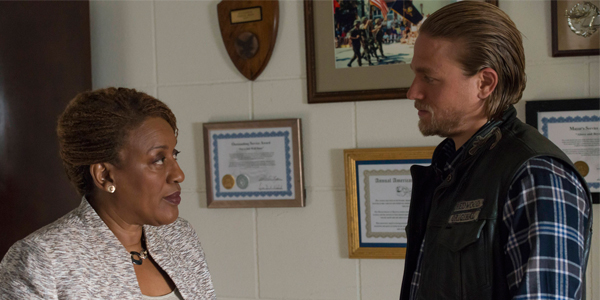 Can Jax put his plan into action and keep his club safe? Find out that is how Tara’s plan is going in this week’s Sons of Anarchy.

The show starts with a back and forth between the two power couples on the show, Gemma & Nero and Jax & Tara. For the first time in the shows history’s appears that Gemma is the one in the right and has the most stable relationship. It’s also clear that Tara is having doubts in the strength of her plan as Jax tries to get close, but she holds strong keeping him out.

Jax goes into do some business but is interrupted by Unser, who is concerned about Tara, and a teen who throws a pipe wrench though the candy store window. The crew tries to find out what is going on with the girl, but is paid a vist by Roosevelt. It seems DA Patterson is willing to do anything to take down Jax and the club, and while Roosevelt is the law he is fair and gives Jax a warning of the DA’s plan.

Jax and the club head up to chapel to discuss how to get out of guns and get rid of the DA issue and they come up with one hell of a plan. No more secrets seems to be what will save Jax, talking everything through with the guys and not trying to do it all on his own. Jax takes the idea to the Patterson herself, they are willing to give her all the intel and deliver the IRA to them in exchange for immunity for SAMCRO and help getting Tara’s charges dropped. Patterson decides to go along with the plan, but can Jax put a nice bow on this all before the season ends?

In prison, unaware of the deal with Patterson, Clay is working all the angles to break out to run guns for the IRA. He has one of the most entertaining moments in show history in the prison church, followed by one of the most gruesome. Clay gives a beating and gets one for his actions, but is ready to be sprung.

Finally thanks to Nero trying to be the piece keeper in the crew, Tara’s plan starts to unravel. Jax and Nero come to blows at Derosa and everything from Nero’s plan to take the wrap, and Gemma’s assault by the guards is laid out. Gemma also adds what she knows about Tara faking the pregnancy, which sends Jax off to find the truth.

One of the moments which shows the other side of the club is Jax and the young girl from the first few moments in the show. Throughout the episode we learn there is a connection between the two, the accident that killed JT lead to another accident that killed that girl’s mother. Even with everything going on Jax takes the time to find out about the girl, learning her father and her are losing their home and she has some mental issues. Jax talks to Oswald and gets the home saved and sits down to a heart to heart with the girl. It shows how important the club is to the town, and that even though they are involved in the end Charming and family is their motivation.