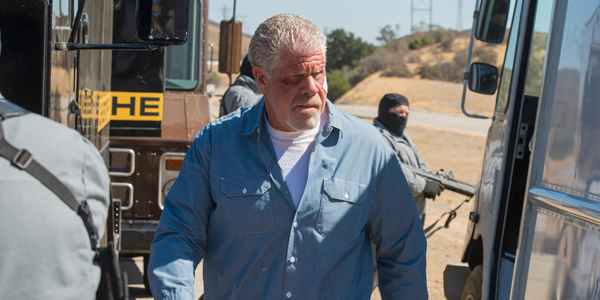 Jax’s endgame is moving along just as planned, while everyone else’s falls apart in this week’s Sons of Anarchy.

The writing has been on the wall for years that Clay would not make it to the end of the series, and tonight one of the most hated characters on the show met his end. The final run to get in to legitimate business is beaching quiet bloody for Jax. For someone who wants to do the right thing, Jax seems to not have any issue killing and cutting down anyone who gets in his way.

The show opens with the boys getting ready for the big break out. Everyone has their assignment, and Jax’s gives Patterson all the details to take down Galen. But as the show unfolds we find out that it was all a smoke screen to get rid of Clay and Galen. The deal with Patterson was to get all the cops on the other side of town while they broke out Clay. Even though the plan was solid one of the guards got away and shot Bobby throwing a wrench into the final plan. The boy met Galen with Clay at and old airport hanger. When they arrived they called Gemma to bring Tara to patch up Bobby before he bled out. While waiting Jax shot Galen in the head, and killed all his men. It was a very Soprano’s like moment watching this plan unfold, and the killing was not over. Tara, Gemma, and Nero arrive to take care of Bobby, and just in time for part two of the plan. SAMCRO can’t be blamed for killing Galen, so the boys voted it would be Clay to take the bullet for it. They march him into the back office, and right in front of Gemma and Tara shoot him, multiple times until the former leader was laying in a pool of blood. The ladies are in shock, but pull it together to get Bobby to the cabin for help. There is even a slight flutter of caring between Tara and Jax, when she reaches for his hand.

Patterson learns that she was played and is ready to take the boys down, and calls Tara. She offers her a deal in person at the hospital. The only hitch is Tara will need the bullet from Bobby’s shoulder to prove it was the club that took down Clay’s transport. The boys meet with Connor to work out a deal, telling him it was bad blood between Clay and Galen that lead to the blood bath. Connor’s only option now is to work with Marks, or the IRA’s gun business in California will fall into the hands of the Asians. Connor agrees to sell the story to the Kings, but knows it will be a tough sell.

Jax has in the past used the law to help him giving people up and working to make deals, but this time Jax is playing all sides against the middle. Even with the support of the table can he pull this off and come out clean on the other end or is this anti-hero doomed to follow in his father’s footsteps?