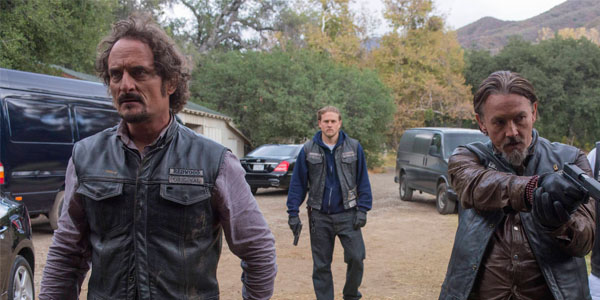 As the season starts to come to a close, this could go down as one of the bloodiest in show history. Find out who will make it to the Sons of Anarchy finale next week.

Jax is once again playing a masterful game of chess moving all the pieces around on the board, to get his end run all lined up, but there is a problem with his plan. Jax is so focused on keeping everything in line he is blind to what is going on in his personal life. Jax is playing all sides, keeping the Niners’s, Chinese, Irish, Biz Lats, Italians, and DA Patterson in line, but there are some plans going on out of sight that can take this whole plan down. Sutter has been the master of misdirection in this series since Jax played the ATF way back in the first couple of season, and this episodes is a perfect example of his craft. Just when you think Jax and the Irish are set, the boys go and kill two of Connor’s men. He then meets with the Chinese and hands Connor over, only to have Marks’s men take out Lin and men, showing the Irish were really not the target. It got a little confusing as all the moves unfolded in the 90 minute episode.

While Jax was making all his moves Tara was playing her own game, getting Patterson to agree to a deal. Tara was able to deliver the bullet, hesitated and took the boys on the run. She reveals that in the end if she took down the club she would only be hurting her son’s father, which she does not want to do. Even though she is all over the place, she played Jax better than anyone has in the past six years, pulling him close assuring him it would all work out, and getting him to drop his guard. Also falling apart is the business partnership and paternal relationship between Jax and Nero. The former junkie gangbanger found out more about Jax’s involvement in the death of the kid’s mom from the school shooting from a almost dead Juice. Unable to keep it all in Juice too enough oxi to kill Bobby, and after being cleaned up confessed it all to Nero. Nero knows how bad Jax is, but has been able to stay supportive giving him the benefit of the doubt, but the relationship is starting to crack. Nero’s own crew and the Mayans as him to step away from SAMCRO, and his loyalty starts to waiver. The best lines of the show this week go to Tig and Happy sealing the show with some of the creepiest and most amusing lines.

The show was intense this week, breaking many of the characters and relationships. As the battle lines are drawn who will be enemies and who will be allies after next week’s finale?