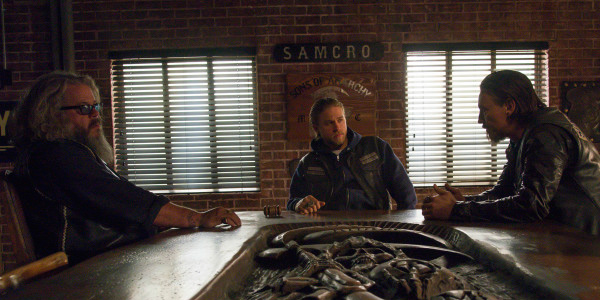 This may go down as one of the most intense season finale ever. So let’s see who is still alive in Charming as Sons of Anarchy wraps up its sixth season?

The show opened with a somber tone, with Jax writing again in a grave yard to his boys. It has been a while since we have seen him so serious, talking his boy all he has done has been for them. As the opening song is about to start Jax hits a white dove on his bike, a foreshadowing of what is to come.

Jax feels like he is almost out from under the shadow of his father and Clay, but just as he sees the light things start to fall. Jax goes to the shop to talk with the boys, but is interrupted by Patterson. She is looking for Tara also but without tipping her hand she feels Jax out, and tries to reason with him. Jax listens taking it all in, you can see he is rocked by the words. He talks to the guys about Tara and the getting out of guns when they are interrupted again, this time by Alvarez wanting to talk about the gun deal. He is concerned and you can see the piece brokered seasons ago is about to fall apart.

Jax assures him of the deal and even goes to the meet, and is surprised to see Nero there for a gun deal. Nero lets Jax know that Juice told him everything, the good feelings and relationship crumbles in moments at Nero talks about karma. Something special and something Jax could have counted on, a real father figure who loved him, in a moment was gone. After the meeting and SAMCRO left the Mayans killed all of Marks’s men, setting the stage for an all out war in the upcoming final season.

Through out this and last episode Tara has wavered on turning on Jax and taking the wrap, going to jail, but tonight she made her final decision. Jax was able to track her down and confront her before she accepted Patterson’s deal. To everyone’s surprise the Jax of season one was there with her, not the twisted leader he has become, he talked to her and when all was said and done they were a couple saving their boys from the life inside the club. When Patterson showed up for Tara, Jax was there to offer himself in her place to protect his family, stepping up like Patterson had suggested at the top of the episode. Jax sat with Bobby and Chibs, laying out his plan giving Bobby the gavel and instructions to keep moving the club forward.

Jax was slow to tell people of his final plan that that was the biggest misstep of the night. Gemma thinking that Tara had taken the deal went to confront her daughter-in-law. In a wild rage the two fought, but it was Gemma with the upper hand, she beat and tried to drown Tara in the kitchen sink. When that did not work in a blind rage she reached for a fork and caved in the back of Tara’s head in the sink. Outside Juice and Roosevelt heard the commotion, and rushed in just in time to see Gemma covered in blood. Roosevelt told her that Tara did not rat, Jax gave up and protected her and the boys. As he was calling it in Juice shot him through the chest leaving a bloody mess at the Teller house. The show closed with Jax coming home to find his dead wife in the kitchen, moments before Patterson got there to take him in.

The writing and acting was amazing tonight with everyone delivering some of the most touching and amazing performances of the show. Charlie Hunnam was able to deliver one gut wrenching scene after another tonight. Watching him lose Nero, the club, and Tara was one hit after another that could be felt through the screen. And just when you think Sutter won’t take it any further, he crams in one more thing. It was an intense end to a rocky season. The final season will have a lot to wrap up but after tonight I have no doubt Sutter and crew will end it right.