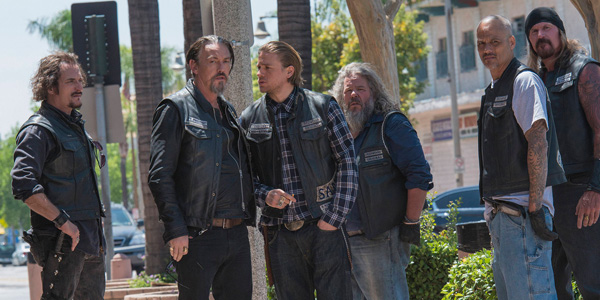 The boys of SAMCRO are back staring off the final ride toward the end of the series.

The man at the head of the table has changed a lot over the past 7 years. The Jax Teller we met in season one was dealing with a sick newborn and a club that was not his own, but now he is much colder and harder after everything he has gone through. For the guys though it has only been about 4 years in show time, and if we consider all that has happened it is a lot for one man to deal with.

Jax starts out the show beating a man in jail, and if you think that was brutal it is just the beginning. SAMCRO has been run by Bobby and Chibs while Jax has been away, and they are just treading water, trying to keep the peace and hold the family together. Once Jax is out though, after being cleared of the Tara killing, the once striving to remain clean club is on a track to get dirty again.

Jax sits all the toys down in the chapel, and is rather unclear on his motives and plan for the club. He makes it seem like he wants to keep things in line, but the path he starts to go down does the opposite. It seems like Jax is ready to burn it all down to the ground, just to get revenge for Tara. Gemma has place the blame on the Chinese, taking the heat off herself while protecting Juice. She is hiding him out at Wendy’s place, while she figures out how to get him out of the town.

If you thought Jax had a lot of plates spinning in the past, it is nothing compare to his complex plan for the final season. In the past he has been clear on what he wanted to do, and his path to get the club clean. This new path is dangerous and reckless, and when the episode ends his seems more Dexter than Jax.

Can SAMCRO survie this new Jax, and will anyone be alive when the show ends in the next few months?