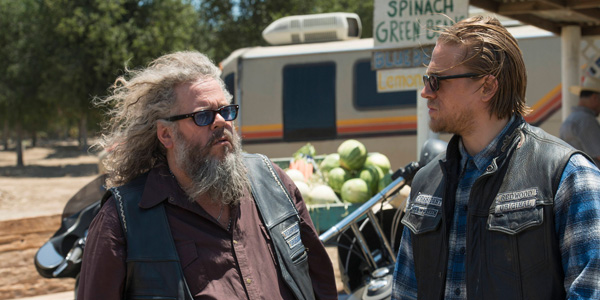 Sons of Anarchy returns today delving even deeper into the revenge driven mind of Jax. Will the club survive his new quest?

Jax is clearly on a mission to tear down anything that had to do with the death of Tara, and the club is following without asking questions. This new Jax is reckless, willing to kill and do anything to get to the end of his plan. This week he is leading SAMCRO to turn against Marks, and continue to hurt Lin’s business. He calls on the Indian Hills chapter for help to take down a gun/drugs deal to hurt Lin, and ends up going all cowboy at the buy.

After last week, this episode slowed down the story, focusing on the plan and setting up the stories for the season. Unser rejoining the sherifs department, Nero trying to keep the peace, Wendy trying to be a mom again, all set up events for the the supporting characters. Jax is making more and more choices without seeing the end of the road, the opposite of the Jax we have come to know. In the past the audience may not have known what the plan was, but are sure Jax has a way out. That all changes this week when Bobby and Jax lay out the plan before the action, making it appear that things are not in control after all. As the final moments wrap up with Jax holding Abel, it switches to Indian Hills counter part holding his dead son, who Jax helped kill. Things are starting to spin, and it may not belong before SAMCRO has more enemies that allies.

While all this is going on Juice’s journey is heavy and hard to watch. He has had ups and downs in the series, but has survived. Theo Rossi bring’s Juice’s pain and difficult choices to life in the show, taking Sutter’s script and making it feel real. Feeling alone and caged, Juice is in for a rough ride, that will only get more out of control next week.

The dark humor in the show is just as strong and fun in the final season. Watching Tig tease Rat about getting head at the docks and sending Lin’s man from last episode back in a fortune cookie box, continues to show Sutter’s dark side in not only drama but also comedy.