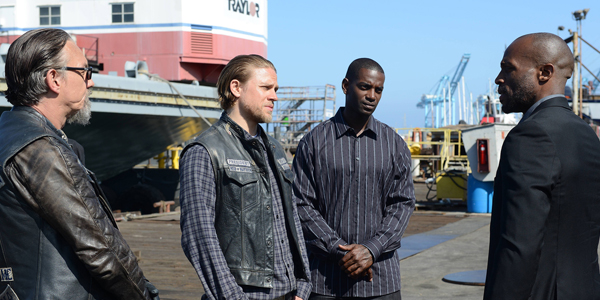 If you think that Jax would slow down at any point in the final seasons of Sons of Anarchy, you were wrong.

Jax seems to be losing more and more control with each week, and the smart leader has seemed to be lost completely. Jax has accepted the quicksand that is his life and is going along for the ride. He has fought so long to not turn into Clay, and that is exactly who he has become in this final season, right down to the way he is acting with his mother. He is no longer seeing all the angles, unable to see the lies she is spinning. He has always had a blind spot when it comes to Gemma, but without Tara there to tether him, he can’t see the truth. This week’s his plan to destroy Lin also involves doing some damage to Marks, playing one side of the Niners against the other. He knows that if Marks has issues to deal within his own crew it will take some attention of SAMCRO.

Gemma has her own issues dealing with Wendy and the boys  while an angry father shows up at Deosa. She tries to calm the situation, but is hit, sending Nero into a rage and the cops being called. It adds to the pile of issues the Teller family has to deal with.

While Jax is working on his plan Juice is trying to get out town again, but just can’t walk away. He needs to be with his brothers, but in the end it does not look like he will make it. He gets Unser to help get Chibs to sit down and talk, at gun point, but it does not go well. His last ally in the club is ready to tear off his head. Juice really has no where to go, making me wonder how many more episodes he will make it.

Speaking of Chibs it looks like he has a little romance brewing with the new sheriff. She has a thing for him, and it is unclear weather she is doing it to make a case against the club or really just trying to be Unser 2.0, keeping the peace in Charming, even if it means taking a bribe or two.

As the final song rolls, the Bastards posing as Niner’s tear up a massage pallor, while Jax stomps a new hole in the man that hit Gemma. It feels like the past all over, and looks like our leader is completely lost.