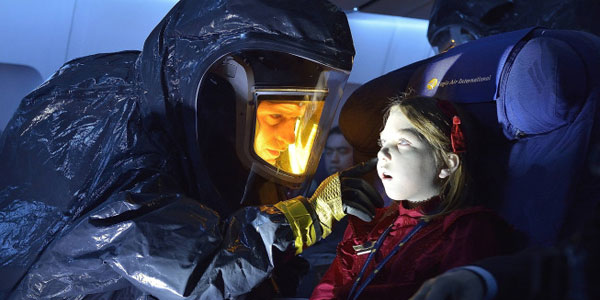 Guillermo Del Toro and Carlton Cuse deliver one hell of a series premiere for the new FX original.

Vampires, in my opinion, are probably the most boring creatures within the lexicon of monsters.  Your average vampire tale, a spin on the blood suckers as bastions of temptation into a sexy new lifestyle, is SO overplayed, it leaves me yawning pretty quickly.  Thankfully, Guillermo Del Toro is not interested in your average vampire tale.  The creepy, organic and flat out gross creatures from Blade 2 clued us in to that early, and now The Strain has provided an even more unique and nasty take on the vampire mythos.

Based on the book trilogy by Del Toro and co-writer Chuck Hogan, FX’s new TV series kicks off with an exciting, cinematic and jam-packed first episode.  Most of the story is dedicated to establishing our wide range of characters and setting up the soon-to-be epidemic that gives the show its name.  See, in this universe, vampirism is not sexy, it’s a disease… and not a very pleasant one.  The outbreak begins on board a passenger plane, which lands at JFK airport with virtually every passenger dead with no apparent cause.  There’s a few survivors placed immediately in quarantine… and a ten foot tall coffin-shaped box in the cargo hold, covered in creepy runes and markings.

This is all discovered by our protagonist, CDC scientist Dr. Ephraim Goodweather (House of Cards‘ Corey Stoll), as his team investigates the inexplicably dead plane.  Word of the plane also reaches some of our other players, including a shadowy cabal with a keen interest in the coffin, and a pawn shop owner named Abraham Setrakian (David Bradley) who seems to be one of the few people who understands exactly what is transpiring.

The rest of “Night Zero” shows exactly how the contagion makes its way out of the CDC’s containment jurisdiction, setting the stage for the horrors to come.  It happens through a series of compromises, with characters making terrible decisions but for very valid reasons.  This pandemic begins thanks to some truly noble– yet misguided– intentions, adding a moral complexity that takes us way beyond a simple “good versus evil” tale within this first hour.

I won’t spoil any of the specific twists and turns, but I’ll say the cast assembled by Del Toro and show runner Carlton Cuse is exceptional.  Stoll plays Eph as an asshole, but a very charming one– he’s amazing at his high stress, demanding job, but that comes at the expense of his family.  It’s easy to understand his obsessively driven nature, yet just as easy to understand why someone would put up with him.  In less than an hour, Eph drew me in as a lead, investing me in both his ability to combat this monstrous plague, and the fractured state of his family.

I was equally impressed by David Bradley’s Abraham, a Holocaust survivor who has lived through this exact same horror before.  I’m used to seeing Bradley in his nasty, angry codger roles such as Filch in Harry Potter, so it was great to see him play Abraham in a different light.  Bradley carries his strange vampire hunter with a sense of private virtue, fully aware his explanation for these extraordinary circumstances will make him sound like a madman, yet committed to trying to stop the outbreak all the same.

The supporting cast is equally great, my favorite thus far being Eph’s partner Dr. Nora Martinez (Mia Maestro).  Nora gets to shine with a few genuine hero moments in the pilot, and she shares a great chemistry with her fellow CDC agent.

The Strain offers a very unique spin on vampire mythology, and I found it to be a refreshing break from what we typically see.  Tying the traits of the monster to a disease is a genius idea, one that de-mystifies the monsters, while still providing room for the supernatural, as we learn when we encounter the rather terrifying creature inside the coffin for the first time.  It’s one of a few moments that made the gore hound in me jump up and cheer, a nice change of pace from the well done, procedural nature of the rest of the story.

There’s a lot of pieces in play already by the end of The Strain‘s first hour, and I’m intrigued to see where these characters will go from here, with the disease spreading all throughout New York.  Guillermo Del Toro set the tone for this eerie, cinematic and rich world very well, and the bigger story already has me hooked thanks to the well crafted characters and the interesting science-meets-supernatural angle of the vampires.  It only took an hour, and now I’m full-on infected by The Strain… I can’t wait to see what happens next!