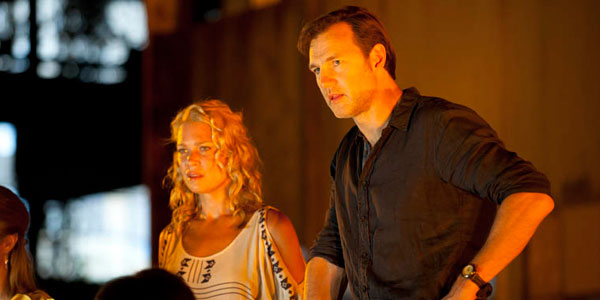 The third season of AMC’s The Walking Dead continues to impress, with a new episode that doesn’t hold many punches.

This week’s installment of The Walking Dead, called “Say The Word” is a bit quieter than last week’s plot-heavy “Killer Inside,” but on the new, improved zombie show, “quieter” doesn’t mean things grind to a screeching halt.  Yes, the group in the prison is devastated by the deaths of Lori, T-Dog and Carol (wait, what?) last week, but they also have a new baby to contend with, one who needs formula and some old-fashioned tender love and care.  But with a dead mother, and a father so completely mad with grief that he grabs an axe and charges full-on cowboy style into the depths of the prison to massacre some Walkers, it’s left to the rest of the survivors to figure out how to care for the newborn. It takes a village to raise a baby… even in the zombie apocalypse.

Rick’s grief-fueled axe murder frenzy is the biggest bit of action in the otherwise lower-key week, and director Greg Nicotero– who’s also the makeup mastermind behind the show’s many undead creatures– revels in the grisly, nasty destruction of the Walkers by the out-of-control Rick. We’ve never seen Rick lose control like this, and he lets himself get bathed in zombie blood, grunting and screaming and even attacking Glenn when the poor kid attempts to calm him down and get him to rejoin the literal land of the living.

There’s a brutality to all of Rick’s scenes this week that’s unsettling, and it gets even more harsh as the former Sheriff finds the room where his wife should be… only to find a bullet casing and some bones and viscera… along with the severely bloated zombie who ate Lori’s body.  Rick puts two and two together in this scene the same time we do, and it’s an ugly, awful realization when it sets in– I hated Lori as much as any self-respecting Walking Dead TV fan, but I didn’t really need to see her having been devoured entirely by a zombie.  Some things can’t be unseen, and this is certainly enough motivation for Rick to go even more postal on the bloated ghoul, shooting it in the head before shanking it dozens of times in its distended belly, the final resting place of his beloved Lori.

While Rick’s descent into madness and the “eight survivors and a baby” quest for infant formula play out, we also spend more time in Woodbury, and Andrea and Michonne hit a crossroads– Andrea has been sold on the place and doesn’t want to leave. Michonne is more than ready to go, feeling uncomfortable and seeming to be the only survivor to have read the Walking Dead comics and hence know what happens next– I can’t really figure out any other explanation for her near-superhuman ability to smell something rotten in the seemingly-ideal Woodbury.

But feel uncomfortable she does, leading Michonne to steal back her sword and go snooping around The Governor’s home, as well as the backstage area behind what turns out to be the comic’s gladiator arena. Michonne believes she and Andrea are actually prisoners, and tries to convince Andrea that they need to escape while they can, but her beliefs turn out to be unfounded paranoia, as Merle is more than happy to see both women out.  Andrea’s already drinking the Kool Aid, and has no real interest in leaving, and Michonne’s paranoid idea that they would be held against their wills is the last straw Andrea needs to discredit her friend and convince herself to stay. Michonne gets out while she can, bearing a path through the wild leaving Andrea behind.  I loved that Michonne was wrong about how hostile the denizens of Woodbury are, and it was a nice reality check to see her being overly paranoid with her prisoner idea, seeing as how to this point she’s been impossibly ahead of the curve with everything regarding the town.  I’m interested to see how the split affects her as she ventures out on her own– we’re already seeing the effect her departure has left on Andrea, who starts taking a much more critical eye to Woodbury, especially the zombie gladiator arena for which she gets a front-row seat beside The Governor.

The arena isn’t the only comic book reference we get in Woodbury– we also kind of meet Penny, The Governor’s zombified daughter. The opening sequence as he brushes her hair, pulling off a chunk of scalp was both gross and twistedly endearing. David Morrissey is doing an amazing turn as Woodbury’s imbalanced leader, adding a strong dash of genuine charisma and pragmatic leadership to the villain. This isn’t the cartoony bad guy of the comic series… The Governor is a real person, who genuinely cares about his people, from Merle and his soldiers, to the general populace for whom he provides what bizarre entertainment he can.  With scenes like the zombie heads in the tanks and this week’s gladiator combat, and weird notebook scribblings, it’s very evident The Governor is still an incredibly damaged person, but his humanity and compassion for his group tempers his more villainous tendencies and makes him the most watchable new character of the season, by far.

Yes, The Governor is a little crazy– keeping his zombie daughter locked in a closet and all– but his imbalances can’t be judged too harshly, especially after Rick receives the notorious phone call right after gutting the zombie that ate Lori– fans of the comic know who’s likely on the other end of the line, and it’s probably a clear sign that Rick won’t be in a very good place anytime soon.  Pushing up the death of Lori is an interesting move, and one that I am sure will change the whole dynamic of the inevitable meeting of the two groups. In the comic, Rick’s despondence didn’t kick in until long after he was introduced to Woodbury– when he first encountered The Governor, he was in a much clearer head than he is now. I’m very curious how the traumatic psychological damage of Lori’s death will affect Rick’s reaction to Woodbury and its enigmatic leader.  The stage has been set for the clash of two societies since The Governor was first introduced to the show, but I am loving how unpredictable that clash is becoming now. With Rick already losing it in a very serious way before Woodbury even comes into play with our survivors, the would-be hero has become a complete wild card in relation to what happens next, and it’s sure to make for more compelling television later this season.