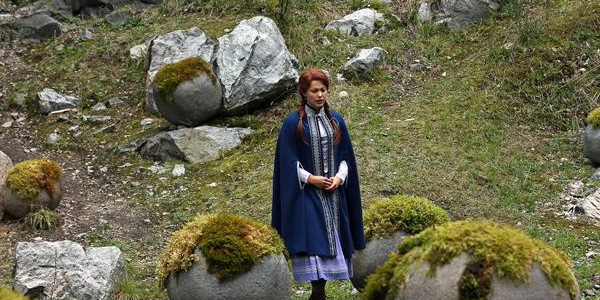 I scream. You scream. We all scream for the Snow Queen. Do monsters really lurk just underneath the skin? Or does fear turn everyone just a little bit evil?

Episode 7 is the Snow Queen’s origin story. Ingrid, the Snow Queen,  had two sisters; Helga and Gerta, Elsa’s mother. In a flashback, the girls are attacked when Ingrid discovers her powers. Even though she is instantly appalled that she killed a man. Her sisters support her and agree that she saved them. Ingrid may see herself as a monster, but her sisters just love her for her. They make a pact that day to always be there for each other. They seal this promise it with three ribbons they place on their wrists.

As time passes Ingrid becomes meek and her powers grow stronger. Still her sisters support her and love her. Ingrid continues to hide herself away afraid to let her “monster” destroy her sisters’ lives. Ultimately, against her sisters’ wishes, she makes a deal with Rumple. In exchange for the yellow ribbons, the true symbol of unconditional love between sisters, she gets a magical urn and a set of blue gloves to contain her power.
But with magic comes a price. When Helga’s love, the Duke, makes a move on Ingrid, wanting to be with the future queen. She uses her powers to escape his grasp. The Duke spins lies about Ingrid to Helga, but she sides with her sister. He threatens to tell the kingdom that Ingrid is a monster with horrible powers. In a desperate act f self defense, Ingrid attacks the Duke with her powers. Her icy powers hit her sister, freezing her and ultimately killing her.

Gerta discovers Ingrid sobbing by a pile of ice cubes that was once Helga. Realizing what Ingrid has done, Gerta is horrified. Not waiting to hear the full story, she instantly assumes that Ingrid is a monster and places Ingrid in the urn. She then goes to the rock trolls and gets a spell to erase the entire kingdom’s memory. Ingrid traded her sisters’ unconditional love for enchanted objects, which lead to horrible consequences. Fear does things to people.

Back in Storybrooke, fear is nothing new to the Snow Queen and she is determined that Emma learn the same lesson. Emma, determined to prove the Snow Queen wrong, witnesses the fear in her parents, and accidentally hurts her father. Shocked with what has happened Emma flees. Maybe she is a monster too.

Snow and Prince Charming come to see that they don’t need the Snow Queen to tear their family apart; they are doing it on their own. Fear will destroy them. They must keep their family together.

Not surprisingly, this episode ends with the Snow Queen striking another deal with Rumple. When she was young she made a deal to contain her powers now, back in Storybrooke, she vows to help Rumple. She can help him leave the town behind in exchange for her having Storybrooke.  Will she get to pull the strings and control the citizens of Storybrooke creating her perfect family?