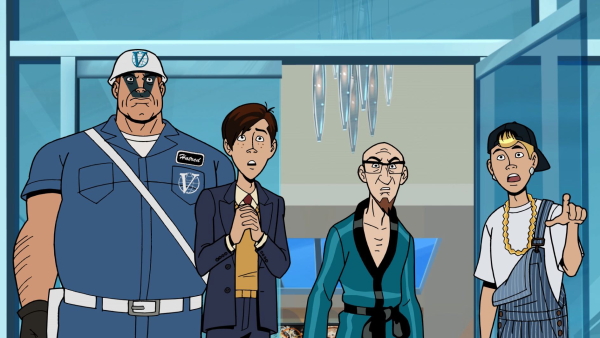 Well, they’re movin on up, to the east side. To a deluxe apartment in the sky.

At the end of season 5, Dr. Rusty Venture’s brother, Dr. Jonas Venture, Jr., was killed. When Jr.’s will is read to Rusty, he passes out when he learns that Jr. left his multi-billion dollar business empire for him, including a new compound in New York City. So it’s bye-bye to the old Venture compound and hello New York City.

You just have to love this show with all it’s pop culture references. In this episode, a group of costumed heroes show up at the new Venture compound and Hank says “I think it’s the Avengers.” It jokes like that that just make me love this show.

Doc Hammer and Jackson Publick have done a great job bring the brothers back for a sixth season. The pop culture references are hot and heavy like always.

So far, season 6 is shaping up to be as great as previous seasons.