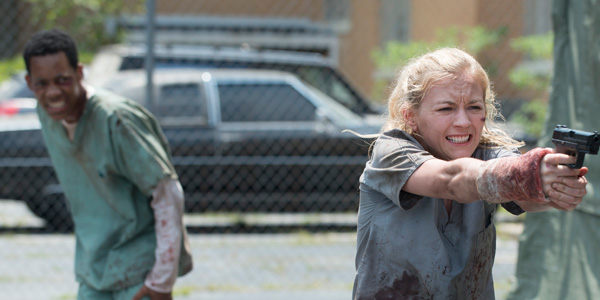 This week’s The Walking Dead gives a glimpse at how others survive in the zombie apocalypse, and it is much different then our survivors.

One of the best parts of the show this season has been seeing how others have been surviving in this new world. This week we get to see where Beth has been since she was taken last season. It appears that Atlanta is not all lost, thanks to a select few surviving inside a hospital. Once again though this shows the ugly side of living with the zombies.

The group is lead by a woman, but she is willing to let the men in the group use the other women as they please to keep the peace. So when Beth is brought in to join the group she upsets the stays quo. The entire hour takes the viewers through how Beth is able to find her way in this new group, taking her time to study the dynamics of the group before making her move to escape. And although she is unable to get away, she does have an ally by the end of the hour.

Many viewers spend time thinking how they would act in this world. Wondering would they be a Rick or a Daryl, but there are infinite ways for people to go. That is forgotten as the show has focused on the main group for the past 4 seasons, only once in a while seeing how others have survived. The different perspective, shines the light on our survivors and how difficult it must be in this world to hold on to humanity. Many fans have been upset with the toning down of Tyrese, but showing these other groups just reinforces how tough and noble he is as a character in the TV world.

As the final moments tick down in the show, and she is about to go all Rick on the people, Carol is brought in on a stretcher. With these two women in the hospital, there is no doubt the survivors days are numbered.