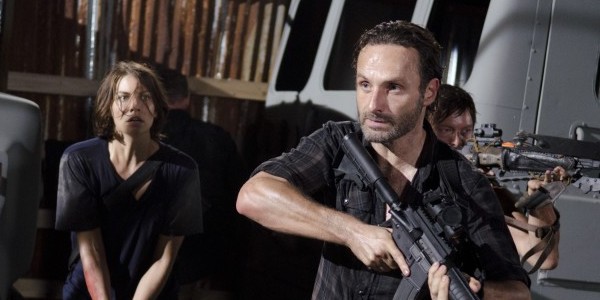 The Walking Dead returned to TV this week with the second half of the third season. If this episode is any indication on the rest of the season, it is going to be one hell of a ride.

This episode gave fans a status quo check getting updates on both of the groups.

In Woodbury all hell has broken loose with the Governor seeming to enjoy the chaos more than the calm Woodbury that had been shown I the first half of the season. After the fight between the Dixon brothers fall apart thanks to the prison crew, the town is in a panic. They are afraid of the living and the dead thanks to the prison gang leaving a small section of fence open allowing walkers to enter the town. Andrea and Milton have to step up to try to get some normalcy back, a walker killing one of their own and the Governor killing a bitten citizen on main street flushed normalcy down the toilet.

Meanwhile our prison crew makes their way home with a new member in tow, Merle. Can the one handed redneck fit in with the rest of the prison crew? Not according to Rick, forcing Daryl to choose between his new family and his blood. When pushed by Rick, Daryl chooses his brother, and they make their way off into the woods while the rest head home to the prison.

When Rick and crew return they find their group has grown, and Rick is not sure adding more people is in their best interest. After the farm you would think Rick would see the need to keep the group safe but allowing others to join, but when the tables are turned he decides to turn away Tyrese’s group. When the rest of the group question Rick’s choice he starts to show just how unhinged he has become because of the loss of Lori. Rick’s hallucinations of the dead are doing more than talking to him on the phone, they are starting to be visual, sending the leader into a rage, scaring not only the new people but his own group.

Will his madness be the prison’s undoing? And will they able to stand up to the Governor if he comes knocking?