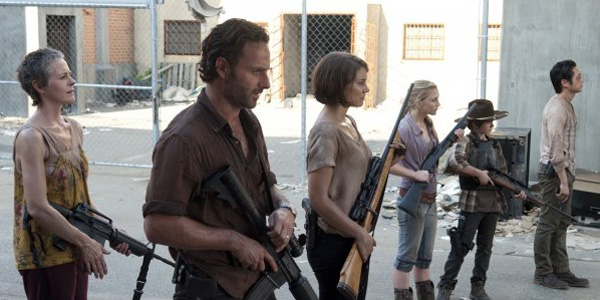 In the Zombie Apocalypse, some people build armies, some rebuild families, and some are just plain nuts. Can Woodbury and the prison coexist?

This week’s episode of The Walking Dead highlighted the differences between the two communities. Andrea continues the person who fans either love or hate, she seems like a strong female character yet appears to lack the ability to think. She is at the center of this episode and her treatment in both camps show just how radically different the two groups are at this point.

Woodbury has become the staging ground for the battle between the camps. The Governor is willing to enlist anyone that can fire a gun and is training them to take on the prison group. He is hiding the truth from everyone though, telling the town that he went with an open hand and the prison camp fired first, playing the hard nosed leader and keeping his people in the dark about what goes on outside the gates. The lack of news or ability to get it has blinded most of the town to what is going on in the world, and as the old saying goes in the land of the blind the one eyed man is king.

Back at the prison Rick seems to be holding himself together for the time being, but that could change at any moment. Hershel is stepping up and Darryl is keeping his brother in line, giving Rick a little bit of a breather. There were two good exchanges between Merle and Hershel and Merle and Michonne this week… both show the many sides of the one handed redneck. With Hershel, he shows his tough yet semi-educated side, and with Michonne he appeals to the warrior in both of them. Merle is slowing working his way into the group, and hopefully he won’t turn on them in a time of need to rejoin the Governor. The group shows the ability to work together well when Andrea comes knocking at the gate, and they take her in to their home. Even though she has survived with them much longer than with the Governor, she is still blind to just how bad Woodbury is and is willing to choose the town over her friends. Michonne does not speak much but when she does it has some weight, and when she tells Andrea she has chosen a warm bed over her friends and family, it hurts.

The final moment of the show follow Tyrese’s group being taken into Woodbury, and most of the group already drinking the Kool-Aid, but there is a glimmer of hope that Tyrese, once he sees the truth, will pick Rick and his family over the Governor… but in this show anything can happen.