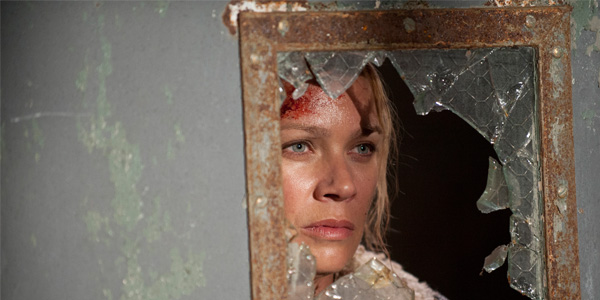 Something is going on in Woodbury, but have no fear Andrea and Milton are on the case. Something no Walking Dead fan wants to hear is that the only one who can save the prison from a massacre is Andrea, but that was the case on AMC’s The Walking Dead.

This episode was all about Andrea finally seeing the light, but it did not end well for Michonne’s ex-best friend. The episode opened showing one of the first nights Michonne spent with Andrea out in the woods. It gave a little back story on Michonne’s pets– they were apparently people she knew, and not people she liked before the outbreak.

The episode revolved around the falling relationship between the Governor, Andrea, and Milton. Early in the episode Milton shows Andrea the torture chamber the Governor is building for Michonne. He is unable to rationalize his leader’s choices, and and starts to take a stand, by filling Andrea in on all the Governor’s plans.

Andrea is finally seeing the Governor for what he is, a monster, but it might be too late. She tries to leave Woodbury but is stopped a few times before finally making it over the wall. When she gets out into the open, she tries to make ti to the prison, but she is being pursued by the Governor. He chases her into an abandoned factory, and a game of cat and mouse ensues. They go back and forth both getting the drop on each other a few times, the best of which is when Andrea releases a small herd of walkers on the Governor. She finally escapes and makes it to the outer fences around the prison, but out of no where the Governor pops up and stops her from making contact with Rick who is in a tower on guard duty.

We also get a peek at how the Woodbury group captured the walkers for first the attack on the prison. Tyreese is brought to help round up the walkers, and shows he maybe willing to do things to survive, but not at the cost of the lives of women and children. Later in the episode the walker pit is torched by a dark figure in gloves… was it Milton? According to Laurie Holden on Talking Dead, it was.