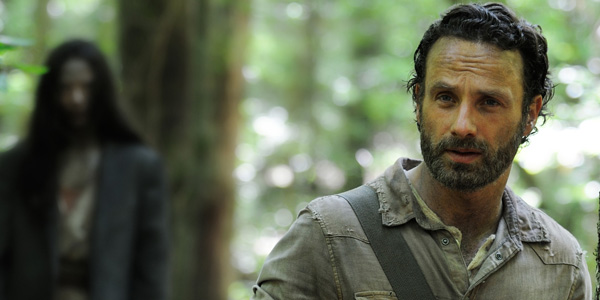 The grass is greener on the other side and six months after the Season 3 finale, someone is still mowing the lawns on The Walking Dead.

The forth season of The Walking Dead opened with everyone in a better place. The prison is safe, or as safe as it can be in the zombie apocalypse, there are multiple couples finding love, and the new members of the group are building a new mini society.

Not only have Rick and crew welcomed the people of Woodbury, but they are going out and finding more people to join their group. For the first time since the show has started the group seems happy, like they are accepting of their new lives and making something positive of the situation.

But this would not be the Walking Dead if things did not go wrong, and when they do they go very wrong. Rick is out for a walk checking the animals and zombie traps, when he comes across a woman in the woods. At first she looks like a zombie but we find out she is just a woman out on her own, scavenging for food for her husband who is to sick to do it himself. Her appearance is ghostly, so much so i thought she might be a zombie and Rick was imagining it all in his head, but she was real. Her husband on the other hand was not sick, he was just a head in a bag. Rick had to make a choice kill her and her head, or walk away. In the end he went home, and you can see he is not the same man he was going after the Governor.

Back at the prison a group is going out to get supplies at a local big box store, when all hell breaks loose. The team though they had cleared the store,but they forgot to check the roof. There was a rain of zombies falling through the rooting roof attacking the group of Tyrese, Daryl, Michonne, Sasha, and a few new faces. As with any episode the new guys always seem to have it the worst, and Beth’s new boyfriend Zach is the frist causality of the season. We also learn a bit about the newest member of the gang, Bob. just from a few minutes on the show we learn he is a former army medic, he is having a hard time adjusting to this new world, and he had a drinking problem. He will make it a few episodes, but I’m not sure he is cut out for the zombie apocalypse.

Finally life at the prison for the kids is different. There is story time, where Carol splits her time between kids books and knife handling, something she is hiding from the other adults. The kids spend their time playing and helping out and some times try to talk to the walkers on the fence line.

The episode ends with the turning of a living person without a bite or death. It appears that the virus has mutated and how much damage can a walker do in side a prison full of sleeping people inside small cells?