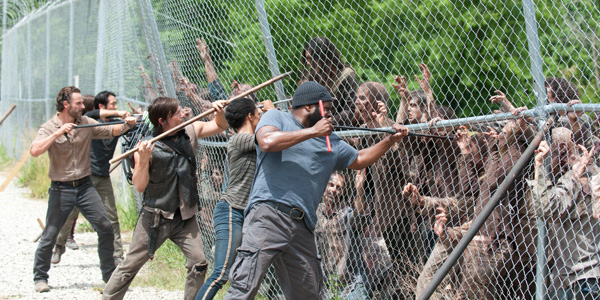 The groups is learning the hard way a simple cold or flu can wipe everyone out this week on The Walking Dead.

The world has changed for those stuck in the zombie apocalypse, it is close to the old west and colonial times then modern times. The ease to cure the cold or wait out the flu is not longer an option. The fever and sickness can kill you and whole new breed of zombies are on the rise. Rick noticed the new look to the zombies cause by a sickness in the season opener. We find out this week because of the immune systems being compromised by the outbreak there is a new way to be turned.

Patrick was the first to turn at the end of the last episode, and this week he is loose on D block, eating his way through the population. He created a mini heard which killed anyone they could get their hands on before Daryl’s group was able to clear them out. The council met to discuss how to handle the new issue, and decided those exposed should be quarantined until they can determine how bad the new outbreak is for the survivors. They also have to decide what to do with the pigs, which could be the cause of this new sickness.

While the group is focused on the issues inside they almost miss the issues going on outside their gates. It seems that some one is feeding walkers outside causing them to group at points along the fence line. The constant pressure is weakening the gate, and even though the Mythbusters say they can’t make it through, they do start to take down the fence. They only option they Rick and crew have is to distract the heard and move them away, and the best way to do that is with fresh meat. Killing two bird with one stone, Rick hobbles the piglets and sends them off to lead the walkers away from the falling fence. It was one of the most cringeworthy moments in the show in four seasons.

While dealing with all the issues inside and out we also get a rather uncharacteristic emotional moments from Michonne. She breaks down when Beth asks her to hold Judith. There is a back story there and wonder when we will learn more about the loner’s past.

The show ends with Tyrese visiting his new lady with flowers only to find someone killed her and burned her body. Who is taking matters into their own hand in this new social structure and how will it impact the authority of the new council?