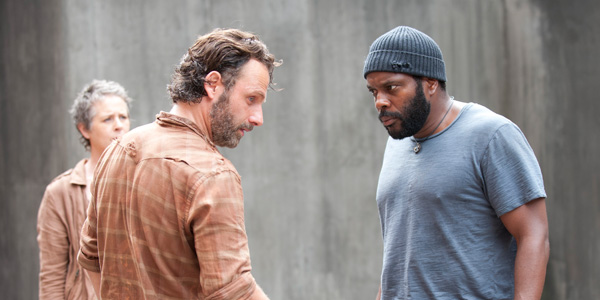 Who is really in charge at the prison? And will Tyrese find justice for Karen’s murder? All this and the largest walker herd ever on this week’s The Walking Dead.

Things have changed since coming to the prison, the meek have become the strong, and the strong have taken a back seat to the group. Since the show has returned Rick has been the quiet farmer. This week while talking to Hershel we find out that Rick is not part of the counsel, but is invited to be part of the conversation on how to handle the new flu. The one time leader has chosen to take a back seat and let the other run things.

Tyrese does a lot of soul searching this week. He is enraged about the killings, grieving for his friends, worried about his sister Sasha who is sick, and unsure if he can go on in this world. Tyrese wants blood for the killing of his Karen, and he is willing to do anything to get it. After Rick Carol, and Daryl try to talk him down he goes wild taking swings at both of the guys. Rick finally steps up and takes the big man down, and almost kills him with his bare hands. The fire is still in Rick and after bottling it up for so long Rick unloads on Tyrese.I n the end Tyrese chooses to live and fight, but the moments before were nail bitting watching him swarmed by a heard, almost going down for the final count. Chad Colman does a an amazing job running through the gambit of emotions in this episode.

Rick steps into cop mode this week looking into the killings and is surprised to find that is was Carol who killed the two. Her reasoning, do anything to stop the spread of this new sickness and save the people. It backfired because it was too late and the sickness had already spread. It looks like everyone is on the chopping block because Glenn is on his last leg with this flu, and Hershel has gone into the quarantine zone to care for those with the sickness. The show ends with Bob, Michonne, Daryl, and Tyrese on the road surrounded by thousands of walkers trying to find medicine for the sick. Will all four return home or will we lose more people next week?