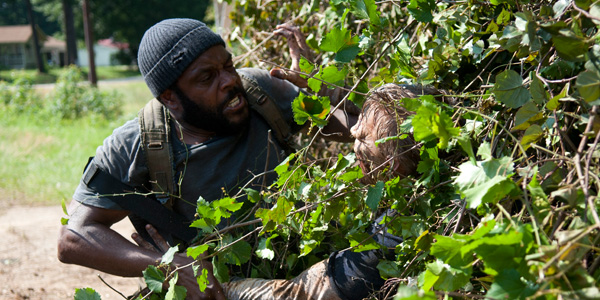 This week on the Walking Dead some people will do anything to live, and some wonder if life is worth living anymore.

A lot of people criticize this show as being too much a of drama with some gore, a soap opera some might say, but it weeks like this prove it is the perfect balance. The show has deviated a lot from the comic, some of the characters and the locations are the same but this world the actors get to play in is a world of its own. This week proves why it is one of the best shows on TV. Watching this week’s show made me as viewer forget about the zombies that are chasing the characters, and look deeper at the characters themselves. The Zombies add a sense of of excitement and danger, but they can be replaced at any time and the show would continue, and that might be what anger some of the comic fans. Kirkman’s world has always been about the characters and this week is no exception.

The show is split between someone who would do anything to live in this zombie apocalypse and one who is questioning why should we continue. Carol has proven she is willing to break all the old social rules if it means keeping her friends safe, but it does not sit well with Rick. The new group running the prison set up rules to follow and ways to act and in doing that Carol helped to set up her own down fall. She acted alone without consulting anyone killing the two first sick in Cell Block D, and making Rick question her ability the lead the group. After scavenging a local neighborhood, Rick decides its time for Carol to go, but not kill her just let her go. This is one of the only times in the show’s history a character has just left without any big fanfare or massive death. It was strange to watch Carol drive off into the sunset, but I’m sure her story is not done, could this be a set up for the upcoming spin off?

Tyrese is also going through his own crisis, losing his new love Karen and watching his sister get sick with the new flu. He wonders how much is too much and is it time to just walk away, the problem is his reckless behavior is putting his team’s lives at risk. He is rushing in and taking on more than he should making the others have to step in to save him. In the end he is ready to get the meds back to his sister, but if she dies can he live?

With half of season 4A done what is in store for our survivors before the winter break, and when will the Governor return to take his revenge?