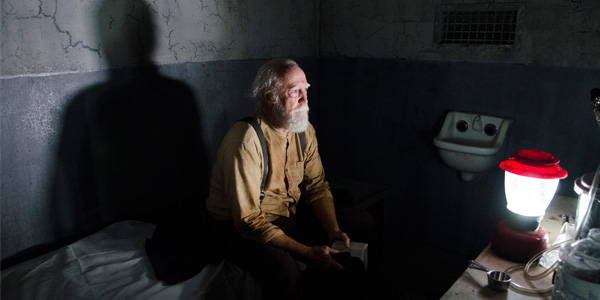 The sickness is taking over the isolation ward can Hershel do what needs to be done and keep his hope? Find out in this week’s Walking Dead recap.

After dealing with the sickness in the prison for weeks, it is starting to take over. The bodies are starting to wear down and people are starting to fall and turn. Not only do the healthy have to take care of the sick they also have to worry about the fences.

This week there was amazing work done by Scott Wilson as Hershel. In this world where at any minute you life can end keeping hope is a difficult thing, but Hershel has kept in close to his heart. When Dale was the voice of reason and hope on the show it felt forced and wrong, but Wilson’s Hershel comes across like the old man trying to show the young one how to act and feel genuine. He tries to shield the young and sick from death to keep their own personal hope live, so their minds don’t let their bodies shut down. And when it is time to be strong and take out a threat he is able to do that too. It feels real the emotions he is going through, and I don’t find myself calling BS on his actions or wanting his scenes to hurry up.

The other threat the group is facing the the falling fences. Rick and Maggie start to fix them, but when all hell breaks loose in isolation it’s Carl that comes to help his Dad keep the fences intact. They are unable to keep them up so the father and son team have no choice but to mow down the walkers breaking through. In past seasons Rick would have sent Carl away, but tonight he gives him a machine gun and they take out the 100 or so walkers together side by side. There is no doubt Carl is going to be a leader in the group in years to come, let’s hope he does not loose his compass along the way.

The show ends with a shot of the Governor outside the gates, watching the group rebuild. Has he been behind all the extra walkers, and what is his plan for the group? With only 3 episodes left before the break it should be intense.