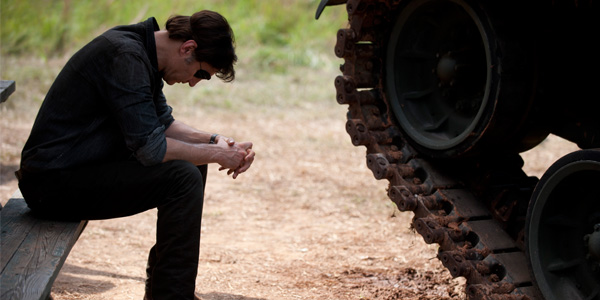 After last week when the Governor looked like he turned a corner, finding a new family and purpose, the old leader made his return this week on the Walking Dead.

Watching the Governor lose himself, coming to the brink of death, and turn it around last week, made watching this week was sad. Last week the former Governor morphed into Brian, a man who lost everything and was taken in by a small family. He protected them and started to build a new life, leaving the old one in the past. While on the run his new group ran into Martinez, and it was all down hill from there.

From the opening 5 minutes you could tell the old Governor was back, his creepy look and dialogue between Meghan and himself over a game of chess and laundry, set the tone for the whole hour. The new camp lead by Martinez was playing a game of Candy Land while the Governor was playing chess. The first 30 minutes or so the Governor spent his time sizing up the new players in the camp. He went on raids and played house, until he saw and opening, and struck for his new position of leader.

Martinez welcomed him with open arms, with a warning, dead weight was not allowed and any sings of that will get you kicked out. Unfortunately for Martinez, the more time spent with the Governor turned that warning into just words, and at the first sign of weakness he was taken down with a golf club to the head and a pit full of walkers. From that point on the Governor eliminated or turned the others in camp to his will and started to build Woodbury 2.0, complete with a new aquarium.

It is a real credit to the writers and Morrissey turning one of the most evil characters in a show full of zombies into someone to root for, and just a quickly turn him back to the bad guy. It showed just how charismatic he can be as a character adding much more depth and complexity than a lot of the other characters on the show. There is gray in this new world, and although Rick sticks to the black and white most of the time, the Governor shows just how far people may go to protect their own lives. Although the Governor seems to be doing this for his new family, it is clear after watching him that everyone is a pawn in his game of chess, and as long as he, the king, does not fall everyone is expendable.