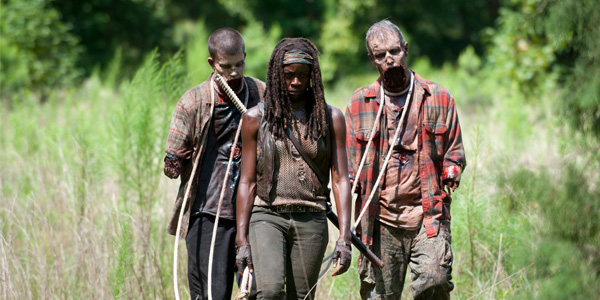 The Walking Dead is back this week, and it delivered one hell of an hour.

One of the things this show does so well is taking a look inside the characters’ heads, and this week we got to see inside Carl and Michonne.

Carl had a lot to work through in this episode. He has to deal with a father that has failed him, loosing the safe home he has had for the last few months, losing his sister, and trying to survive on his own. He keeps pushing the envelope with Rick throughout the episode, trying to prove to his dad that he can take cause of himself, but he slowly realized in this new world he can’t do it alone. As his father lay in a house in some kinds of a coma, he had to go out to look for food, and clear the area of zombies. Carl came across four of them, all who almost ate him. When he finally got home, he realized he can’t do this alone, and he can’t be the grown up he has been trying to be for the past few years.

Michonne is on her own journey this week also. She returns to the prison to see it destroyed and overrun by walkers. She moves through a herd, to make doe new pets and resume her life before our surveyors. On her way out she finds Hershel’s head and puts it out of its misery. She spends a lot of time traveling, and when she finds the trial of Rick and Carl, she goes the other way choosing to be one her own. While resting with her new pets she dreams of her old life, and we get a look at what is was like for the badass of the show before the zombie apocalypse. We find out her original pets were two people she knew, one the father of her child and his friend. They made it to a camp together but the men did not have the skills to survive, and Michonne was forced to use them as her protectors. It adds depth to her character, to see what she had had to go through to find this new family in Carl and Rick. As she travels with her new pets they find a herd, following their aimless wandering. While walking Michonne is faced with a walker who looks like her, and she is forced to choose that future of wandering or go back and find Rick. In one of the most amazing Zombie killing moments in the show, she chooses life and heads to the neighborhood to find Rick and Carl.

This was a great start to the back half of season four, and it will only get better from here.