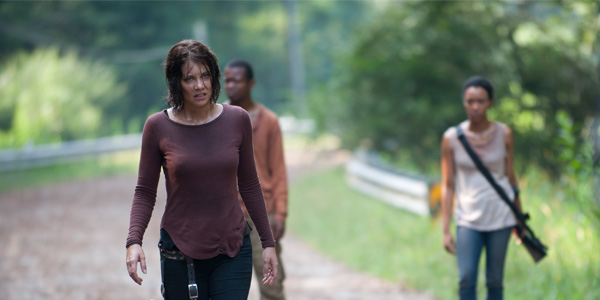 Last week on The Walking Dead we got a glimpse in to life after the prison with Rick, Carl, and Michonne, and this week we get to see what happened to the rest of the survivors.

This week’s show was broken into four segments all happening at about the same time, and it goes through what the rest of the survivors have dealt with after the loss of the prison.

The show opens with Daryl and Beth running from walkers on their own, wandering through the forrest giving the audience little clues to what happened to the others. They come across some tracks, but don’t end up meeting up with anyone. I went back and watched season one this week, Daryl has shown so much growth in the four seasons, he is no longer the loner, although he does revert to survival mode in this episode. Although Beth is holding on to hope, it is Daryl who keeps her safe and grounded.

Tyrese has the two little girls and the little ass-kicker Judith. The sisters, Lizzie and Mika, could not be more different, and that may spell trouble down the road for Tyrese. He has a very hard job in this episode he has to keep all three girls safe, and they are all trouble for different reasons. Mika wants to just run, she is scared in this new world and needs as much care as Judith, but Lizzie is a little Dexter in the making. She almost kills Judith while Tyrese is helping some other survivors, and looks like she is enjoying choking the life out of the little baby. Luckily for Tyrese and the girls Carol shows up and saves the day. Rick never got around to telling Tyrese what happen with his girlfriend, so it will be interesting if the warm welcome will continue once the truth comes out.

We jump to Maggie, Sasha, and Bob out on their own, nursing some wounds and sharping tools. Maggie is determined to find Glenn, yet surprisingly is not worried about Beth. She tries to go off on her own, but the other two follow vowing to stick together. They find the bus, and one by one they take out all the infected to  find Glenn is not on the bus.

Which leads us to Glenn, who still at the prison, surrounded by walkers. He gets himself up and finds his home destroyed, he is able to get back to the cells and stock up on supplies before making his exit. He makes one of the scariest runs through the yard in show history, wearing riot gear and barreling through all the biters. As he comes out the other side he finds Tara, alone in a cage and shut down. He talks her into following him and they make it out to the road, but the push was too much for the recovering Glenn, and he passes out. Tara is able to take out the few walkers, but notices she is being watched. It turns out a big name from the books is the watcher, and introduces himself to Tara. Abraham Ford is here and ready to do more than just survive.