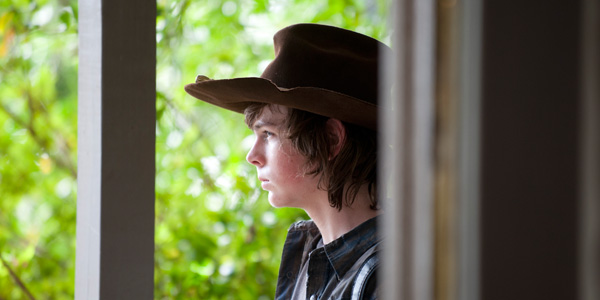 This week’s episode of AMC’s The Walking Dead was another 50/50, focusing on only two of our survivor groups. There was lots of information about our new group and even more suspense with Rick, Carl, and Michonne. Check out how our survivors did this week inside.

With a large cast some characters some seem to fall into the back ground, but in this back half of season 4 they are doing a good job blanacing the stories without rushing through. This week focused on Rick and crew and Glenn and our new survivors.

Rick still recovering, and had to stay “home” while Michonne and Carl went out to find supplies. Rick is still not ready to lead again, telling Michonne he does not have a plan and they should just hang out in the new house. While out on looking for supplies we get some more insight into Michonne’s past and her son. Carl is having a hard time leaving Judith behind and the two bond over the loss of a little one. Back at the house Rick settles in with a book and a soft bed while the others are out, and is awakened with a big commotion. It seems some new group have found the home, and there are a lot of them. Rick reaches for his gun, but he gave it to Carl, so he is hurt and unarmed a house full of scavengers. He slides under the bed, and watches as the boots of the men pass by the bed. Two men fight over the bed, almost revealing the hiding Rick, but he is able to stay hidden. He is lucky with one passed out after the fight, and one asleep on the bed Rick slides out to check his surroundings. He ends up in the bathroom only to turn around and see he is not alone. He struggles but even in his deminised condition he is able to take the guy out. He takes the guy’s gun, leaves the door ajar to leave a walker loose in the house, and heads out the window onto the roof. He climbs down to the ground level just in time to warn Carl and Michonne to go the other way. It does not sound like a lot happened, but the camera work and pacing of Rick’s story was full of ssupsnce, broken up by the other group’s story.

We also got updated on Glenn and Tara, who are on the road with Abraham. It turns out Abraham is on his way to D.C. with his friends, Rosita and Eugene. Abraham is protecting Eugene who is a scientist working on a cure for the zombies. They want Glenn and Tara to join the trip to help protect the last human hope, but Glenn wants to find Maggie. Abraham and Glenn get into a fight leaving Eugene to take out walkers, unfortunately he is not good at using a gun and takes out a few but also fills the truck’s gas tank with bullet holes. Abraham tries to fix the truck, but it is gone stranding the group on the side of the road with no ride. Glenn and Tara take off to find Maggie, and reluctantly Abraham and crew follow.

Another week moving forward, and with all the people heading in the same direction it seems like a reunion is coming, but will they all make it?