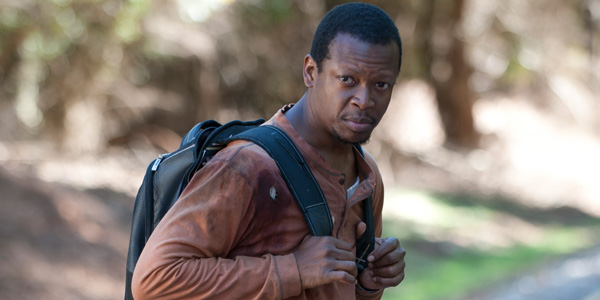 On this week’s episode of AMC’s The Walking Dead the focus shifts to two groups struggling with the choice of moving forward or building a new home in the zombie apocalypse.

In the new world order of of the zombie apocalypse there are only a few choices for people to make. They can choose to move forward, build a life, or wait to die. None of them will bring you a happy ending, but they may give you comfort as to watch the world go to hell.

This week the show looks at two of our survivor groups, Maggie’s crew and Daryl and Beth. Daryl and Beth have a new outlook on life, after the moonshine burning last week, and find a funeral home. Daryl is suspicious of the up kept house and fully socked kitchen, but the duo settles in for a day. They fill up on soda and pigs feet, play the piano, and pick comfy coffins for beds. Beth is focused on the people in the world that are still good, leaving food and still burying the dead, but you could feel the ticking clock until something bad happens. The duo try to feed a little dog who keeps setting off their warning system, and after a day or so of it Daryl lets his guard down, and that is when the attack comes. It seems someone lead a horde of walkers to the door, and Daryl and Beth are split up. Daryl makes it out just in time to see a car with crosses speed off with Beth. It seems like the world is not still full of good people. As he chases after the car, he falls down from exhaustion and is found by the crew who took over Rick’s house a few weeks ago. He is forced to make a choice; join up or die.

Meanwhile the other Greene sister is trying to get to her husband, but Sasha is reluctant to keep going. The episode opens with a well done flashback to Bob’s life before the prison. We get to see why he might be the only happy person in the group. He is the only one who is not alone after the prison battle, and he is doing everything he can to keep his group together. Sasha wants to stay and build a new life, while Maggie is determined to keep moving to try to find Glenn. Maggie decides to leave, going off on her own, and Sasha sets up in another town. Bob, forever hopeful, keeps going it on his own to catch up with Maggie to find Glenn. While Sasha gets used to her new surroundings she see Maggie alone in a group of walkers, and the two kick some serious walker ass. They realize they need each other and head down the road, catching up with Bob.

It looks like next week we will catch up with Tyrese and Carol, the only group we have not seen much of this back half of the season. Will the party of five make it to Terminus? Or will we get our first main cast casualty of the back of season four?