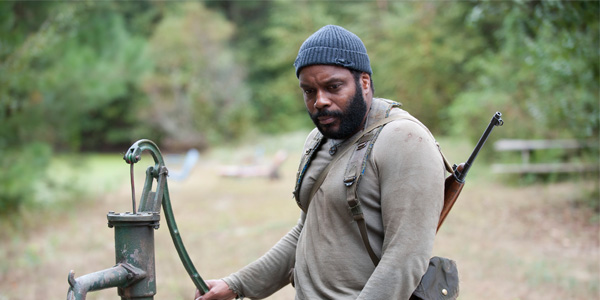 On AMC’s The Walking Dead this week the small family unit had some hard decisions to make. Find out what happened in the grove this week, and who did not make it out of the hour.

This was another week focusing on just one group of our survivors. Carol, Tyrese, and the three girls after following the tracks come across a house. They set up and play family for a few days, but the more time they are together, the more they fall apart.

We start to see more of Lizzy being truly crazy early in the episode as she talks with Carol and then asks Tyrese not to kill a trapped walker. She spends most of the hour going back and forth between willing to kill and thinking she can communicate with the zombies. We finally get the answer to who was feeding the walkers at the prison, and it was Lizzy. She had issues before, and now in this new world she has no concept of reality. In the real world she probably would have been more like Dexter than Carl, but there is no way to keep those types of people contained. It would put the group at risk to not do something, and that is the decision that Tyrese and Carol have to make as the hour comes to a close.

Mika on the other hand is having issues killing anything alive. Although the zombies are dangerous, people can be even worse. We have seen the living take over the prison, kidnap Beth, and the group that takes in Daryl all do far worse than a walker. Carol tries to explain but it is clear that there is no getting through to the little one.

Tyrese has to deal with issues with the girls, while trying to enjoy a real home for once. He is struggling with his own loss, trying to figure out if he should start a new life with the girls and Carol in the home. Reality all comes crashing down when the adults find a bloody Lizzy standing over a dead Mika, trying to tell them that Mika is ok and she will come back to them. It is clear both girls are damaged one only willing to kill the living and one only the dead. Carol and Tyrese make the decision that Lizzy can’t be around people, especially Judith, and Carol takes Lizzy out to the grove to look at some flowers.

It was jarring to see how people have to deal with mental illness in this zombie apocalypse and the choices they have to make. Melissa Mcbride delivered one of the strongest performances in the series this week, while Chad Coleman had some of the best reactions breaking up some of the tension, unintentionally of course. In the final moments Carol reveals to Tyrese her part in Karen’s murder, and the two realize it was what was best at the time, leaving the home and two small graves behind them.