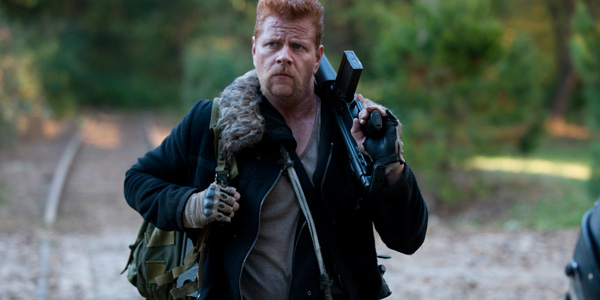 This week on AMC’s The Walking Dead some groups reunited and some had to get used to a new world order.

As we make our way down the tracks toward Terminus with the groups there is a little bit of hope that shines down on our group of survivors. This week focuses on Glenn’s group and Darryl’s new gang, groups that are radically different from one another.

Glenn’s main goal is to get to Maggie, but after days of walking back he is starting to loose steam. As the group comes up to a crossing he sees a sign from Maggie, and it gives him a boost. The rest of the group is trying to stay on more of an even pace, but Glenn keeps sprinting ahead to try to catch up to his love. To get to her he is even willing to give up his riot gear to Eugene, something that gets Abraham to keep the group moving instead of taking a break. Walking the tracks is fine, but when the group comes to a long dark tunnel, Abraham refuses to go in, taking his crew around. The group part ways, and Glenn and Tara enter the dark cave full of moaning walkers. While walking through they come to a section blocked off by a cave in, a mostly solid wall of rocks and walkers. Glenn takes out a few who are trapped to get to the top of the fallen rock to see a whole heard of them waiting on the other side. With Maggie so close Glenn is not willing to turn around, and tries to distract the walkers and get around them. Tara follows but is caught in some falling rocks and trapped. Meanwhile outside the cave Eugene tricks Rosita into doing around to the other side of the tunnel with a car they found to wait for Glenn. The trio is surprised to see they aren’t alone on the tracks, running into Maggie, Sasha, and Bob. The six ride into the cave just in time to save Glenn and Tara.

While Glenn is finding hope, Daryl is stuck with this new group. Daryl spent a lot of time alone before the fall, and found a family in Rick and the others. He became a leader, and someone who found meaning in this zombie apocalypse. This new group however is a step back for him, a group of men who have rules like a boy club house. His way of living honor and trust has to be tossed out and replace, with calling “claimed” for anything he wants and catching a beating for stealing or lying. This new group is unbending, willing to kill one of their own over a lie. Daryl bucks the system as long as he can, but by the end of the hour he falls in line.

Glenn’s group reaches Terminus first welcomed by a woman cooking. Rick’s group is close and will probably get there next, and Daryl’s gang is right behind them. How will they all react to each other, and will everyone make it to season five?