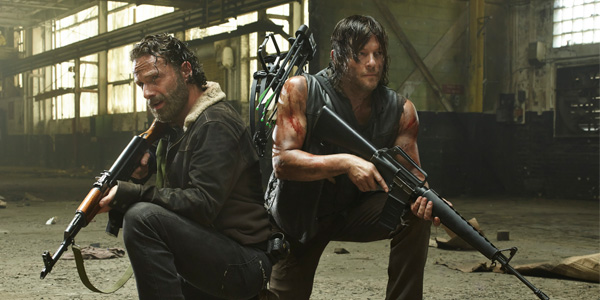 Season premieres sometimes are all set up and not a lot of action, this year the Walking Dead showed everyone how to kick off a season.

Many were shocked how quickly Termius was wrapped, but it did not feel rushed. It was the perfect mix of action and suspense, taking us thought the fall of the cannibals.

Carol proved this week she might be the baddest survivor on the whole show. She took down an entire camp with a gun and a bottle rocket. With the main guys over a tub to catch their blood, it looked like it was lights out for our survivors, but thanks to Carol they were able to escape. She moved through the settlement covered in guts, taking out some of the living and proving she is the true badass of the show.

Through the escape and some flashbacks we find out the people of Terminus take survivors in, giving them a choice become part of the town and eat people, or become one of the eaten. The entire episode was full of action, watching Rick and crew take out zombies and the people of Terminus. Watching them let their captors turn instead of killing them, but staying true to themselves was a welcome change. The badass Rick is back, and it looks like Tyrese is almost as tough as his comic book counterpart.

The show felt like a race until the last monuments, keeping up the pace and keep up the viewers heart rates. It was an exciting ride, watching our survivors work together to protect each other and escape. There were so many great moments and great new zombie kills this could go down as one of the best hours of the series. Tyrese is becoming more of the man he was in the comics. He has been softer, less willing to do what is needed, trying to hold on to his old self. It isn’t until Judith is threatened that he “hulks up” and takes him out, awaking the character we all have been waiting to see.

In addition to the excitement of the escape the audience also got a little bit of back story throughout the episode, and a little bit of foreshadowing with the look one of the characters in the flashback, a bat being swung about by a certain character, and the return of Morgan.