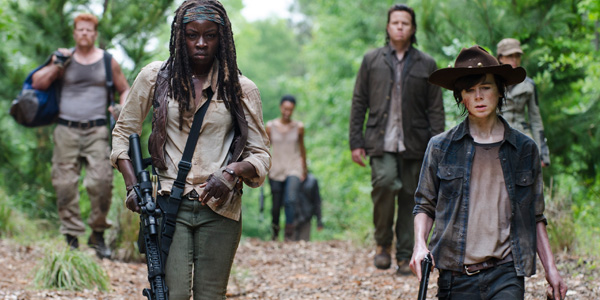 After the race through Terminus the second episode of The Walking Dead slows things down, and sets up the bad guys for the season.

This week’s episode took a step back and gave the group a breather. Abraham wants to keep moving but also recognizes the need to stop and refuel both mind and body. The episode introduces two things that comic fans will recognize, Gabriel and the Hunters story line.Most of the episode was spent watching the survivors deal last week’s events and with choices they have to make about their future. They have to figure out if they want to stay or go, tell details about their solo time, or start all over.

During the show there was a feeling that someone was watching our group, and in the final minutes we find out the the people left from Terminus are the ones doing the watching. They are not only looking for a little payback, but also looking for a meal. Bob is the first casualty of the Hunters, losing a leg to their hunger. The story is not exactly like the comics but there were enough moments to show readers where the story is going. The leftovers from Terminius are willing to go much further than our group, and that is where they are dangerous. Our group lives by a code, and that might in the end be what thins out our survivors.

Gabriel was also introduced tonight, true to his comic roots. Seeing the struggle in his eyes showed there are still people in the zombie apocalypse that have not accepted the new world order, but they can still survive. Gabriel’s acceptance into our group also distracted them from seeing the danger around them. And while the group was having a much needed canned meal, Carol was out on her own with Daryl checking up on her. While having a moment, a car that might have taken Beth drove by sending the pair off in pursuit.