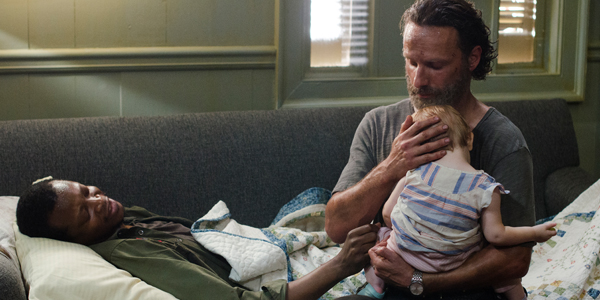 Gareth and his hunters are enjoying some Bob’s Burgers… but turns out he is past his expiration date on this week’s The Walking Dead.

As quickly as the story of the Hunters started it was over. An hour felt like 10 minutes this week on the show, mixing drama and brutality. The gem of the show is the pacing, giving just enough to keep you on the edge of your seat. Even though many fans knew what was coming, thanks to reading the books, it still felt fresh and exciting.

Gareth thought he was tougher and smarter than Rick, and once again he underestimated our leader. Our survivors set a nice trap for the Hunters, leading to one of the most brutal fights in the show. Killing walkers is one thing but watching Rick lose it on another human, evil or not, is something entirely different.

It all comes down to what you believe in this new world. Rick is able to hold on to some of himself, surrounded by people who won’t let him lose the last of his humanity. There are some concerns that Tyrese is getting too soft, losing the edge of his comic counterpart, but Rick needs that side of the group to stay grounded. Hopefully he won’t go full Dale or Andrea, and get eaten because he is soft.

The group splits with half waiting at the church for Daryl and Carol and the others on the bus to Washington. The episode ends with Daryl returning with someone, but we don’t know who yet. Did we lose Carol or is there someone new joint the group?