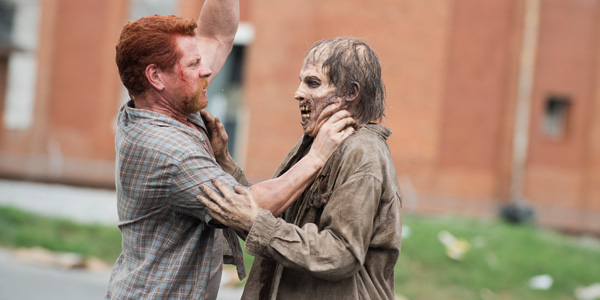 On this week’s The Walking Dead Abraham gets a back story and Eugene reveals a big secret.

Half of our survivors are on the road trying to get to DC, but of course nothing is easy. only a few mins into the show the truck crashes forcing the group to make their way on foot for a while. They make it into a town and hold up in a book store for the night. When they wake up Abraham has a plan, take a fire truck and hit the road again. They make it a little further before breaking down again, forcing Eugene to admit he has no cure to save the world.

It does not seem like much happened in the lives of the characters, but this week’s hour gives audiences a look back at Abraham. The events of the show trigger flashbacks for the red haired survivor, showing him at his lowest point in the zombie apocalypse. The flashbacks are taken from the comics, giving the audience a look at who he was before things hit the fan. A solider home now fighting for his life and the lives of his family against walkers and the the humans left behind. When he defends his wife and kids it scares them, so much so that they take off, only to be eaten steps away from their camp. It breaks Abraham, bringing him to put his gun in his mouth, but right before he pulls the trigger Eugene shows up and gives him a purpose.

Speaking of Eugene, he also gets some shinning moments in the show. His secret is finally revealed. It turns out he has been making up the whole save the world mission just to save his own life. It takes the whole hour before he comes clean, thanks to a series of wins for the seemingly helpless member of the group. He is able to admit one wrong doing, sabotaging the bus, make a new friend, and save the whole group from a small heard. All of these moments make him feel like he is not as helpless as he thought, and when Abraham is willing to risk all their lives to keep Eugene moving, he comes clean about his big lie. Abraham loses it almost beating Eugene to death as the credits roll for the hour.

With only 3 episodes left will the groups all come back together or will we lose a few more along the way?