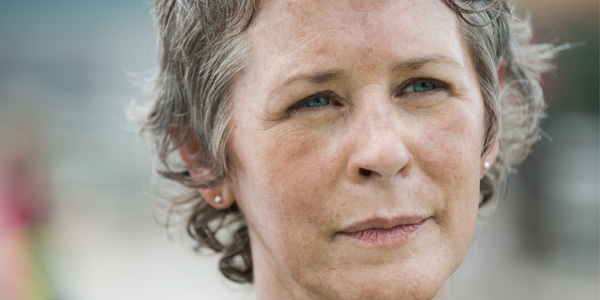 This week we get some flashbacks for Carol filling in her story on the Walking Dead.

The pieces are starting to bring our survivors back together, or so it seems. We pick up with Daryl and Carol, who we last saw following a car with a cross, as they head back in to the city. The are able to keep up mostly, until their car runs out of gas. They hit a few snags a long the way but in the end we see the events that get Carol brought into Beth’s hospital.

The real hook of the hour were all the flashbacks, brought on by events in present time. We get to see inside Carol’s head from the prison up until this moment, giving real insight into her struggles. She is much stronger and complex then the woman we met five years ago in the first season. She flashes back to her time in a women shelter, and her inability to leave her husband, taking even more beatings as a result. Also shown are her moments post husband protecting her new family even at the cost of her own security and life. Rarely are we shown the back ground of these characters, once and a while we get snapshots of their true nature and raw survival skills, but the flashbacks have mostly stopped.

Carol has become a super-woman on the show this season, and it was a refreshing change to see her flaws and struggles. She seems to be so calculating and cold, but there is true emotion to her actions, well hidden until now. Daryl also gets a few moments, but Carol really stole the show this week.

We end with Daryl and Noah going back to the church to get help to rescue Carol. Will they all be reunited before the finale in two weeks?