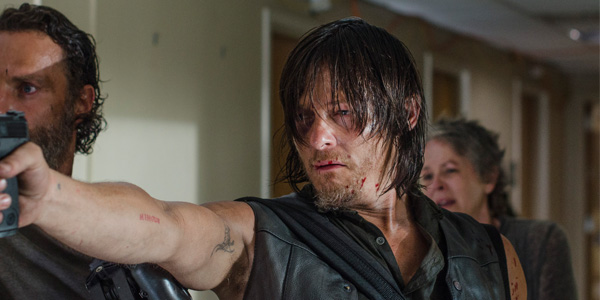 The midseason finale ended with a loss and a few questions for Walking Dead fans.

The Walking Dead keep upping the ante with each finale, and this one is finally going fans the show they have wanted for years.

A lot of fans have been waiting for the characters from the book, especially Rick, to come alive on in the show, as of this week they have. The leader the group deserved has come out in Rick, but with out the back and forth of the last few years, this Rick would not be possible. We forget how much time is spent in the comics on characters and their struggles, and the limited time in the show, so it may have taken 5 seasons but it was worth it. Rick hitting Bob #2 with the car, then shooting him was a moment that sent fans cheering. Rick is not back down, make choices that are balanced but brutal.

Mean while back at the church Gabriel was coming to terms with the new world he lives in, almost killing Carl and Michonne. He snuck out and found the school, seeing the true horror of the world. Returning he brought back a horde, and thankfully Carl and Michonne, along with a returning Glen group, were able to take them out and head to save Beth.

Beth on the other hand had a tragic end, but she certainly proved she was not the girl from season two. She stepped up and navigated through the hospital pretty well, until Noah was threatened, then she lost it. Stabbing Dawn got her shot in the head, prompting Daryl to take revenge immediately. The ending was shocking, in a show full of suspense and surprises it is nice to know they can still shock the viewer.

The survivors are now back together and on the road, but no destination. What is in store for them for the second half of the season? Who knows, but I can’t wait until February!