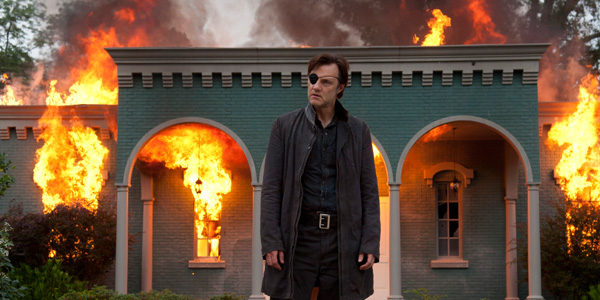 This week sees the return of the Governor to the Walking Dead, but is he the same man who slaughtered Woodbury?

This week we get a break from the prison, learning what happened to the Governor after he killed everyone in his group. The loss of Penny and Woodbury sent the once leader into a tail spin, even unable to protect himself. Martinez and Shumpert both followed the Governor after the slaughter, but soon found he was no long their leader and left him.

The Governor wandered for weeks until he almost lost the will to live. A young girl in a window got him back on his feet and got him going. He meets a family living alone, surviving off of what is left of a food supply truck. They take him in giving him an apartment across the hall. Slowly he becomes a part of their lives, helping them save their dying father by getting oxygen at an abandoned nursing home, and then killing him before he eats them. The Governor gets the sisters and little girl out on the road, but when the car breaks down they have to go it alone on the road. They run into walkers and get chased into a pit where the Governor protects the little girl, and is pulled out of the pit by Martinez.

What is interesting to watch is the ability of David Morrissey in the role of the Governor. He does an amazing job showing off the emotions in the this Zombie apocalypse. When the episode begins we see the old Governor and feel can still feel the disgust at his actions, but as the episode unfolds he changes and his past is almost forgotten. He is a changed man helping these women and child, showing what he was trying to be as the leader of Woodbury, but lost because of the power. In this world even those who lead and protect can lose their way, and this is proof there can be redemption. When Martinez returns the past smacks him back in the face and you can see him wondering can the past really be forgotten?