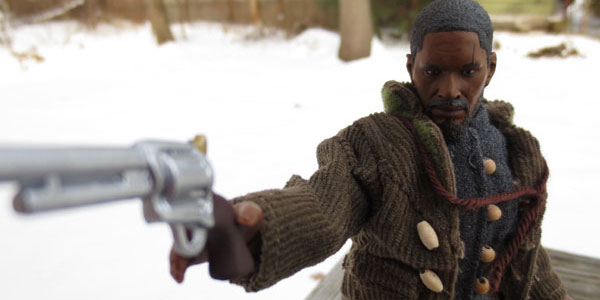 UPDATE:  It’s already a madhouse on eBay in light of the discontinued Django Unchained toys.  Prices continue to skyrocket as profiteers on both eBay and worthless virtual rags like TMZ rake in the dollars on this fabricated fiasco.

If you didn’t pick up the Django figures you wanted, I’m sorry to say you probably won’t be able to, unless you’re super-rich and probably more than a little impulsive.

What gets me is, this whole stink over these NOT racist toys being racist… may end up making them BECOME racist.  These are just movie toys, based on a particularly kick ass movie, but thanks to the wildfire spread of this controversy, the Django Unchained figures will now catch the eye of unscrupulous speculators, and possibly even those asshole Sambo collectors.  These harmless toys will be forever associated with that kind of scum, and they may now end up becoming a crown jewel in the collection of some bigot.

The figures, while wonderfully realized and quite cool, have garnered lots of criticism over the past few weeks, with advocacy groups and civil rights organizations labeling them offensive.  It appears now the film studio is buckling to the pressure and shutting down the whole thing.

“We have tremendous respect for the audience and it was never our intent to offend anyone,” said The Weinstein Co. in a press statement regarding this non-troversy.  NECA has yet to issue a statement but without studio support, I’m guessing the writing is on the wall.

I’m not going to soapbox on this (having already said my piece here) but I will say this is a shame, because the toys really are quite good, and the bad taste left from this debacle means we probably won’t see more Tarantino Megos– Django or otherwise– anytime soon.

What I will say is, if you were on the fence about picking these toys up, I’d do it very soon… all signs suggest a steep eBay bounty will be placed on these figures before long.