Here is Ultron Mk 1 From the Avengers 2 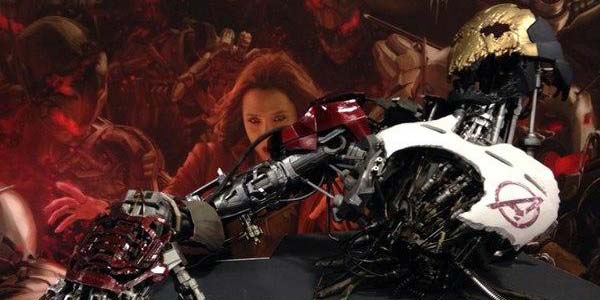 The centerpiece of Marvel Studios’ panel at Comic Con was the reveal of footage from next summer’s Avengers: Age of Ultron, and Marvel had one more treat for fans after the debut of the clip.  Above you will see a photo of Ultron’s first body (he has several upgrades as the film progresses).  This cobbled-together look is what he sports when he busts in on the Avengers’ party and first establishes himself as a dangerous presence.

I like the look well enough (definitely dig the Iron-Man helmet as Ultron’s first head), though I’m more keen to see his later looks, which will likely be much more classic in appearance.  Still, this was a great Easter egg for Marvel to share with fans late in the Comic Con game, joining other props on display such as Ant-Man’s helmet.

Say what you will about Marvel Studios, they certainly know how to connect with us in a way that feels genuine, and genuinely cool.  I know I got that geek-fueled smile on my face as soon as I saw this photo… Now if they would share the footage they screened at the show, my day would be officially made.