Ultron Gets A Voice In Avengers: Age Of Ultron

It looks like the villain of Avengers 2 gets a voice, and it is not who many fans expected. Actor James Spader has been cast to the be the title villain in Avengers: Age of Ultron. 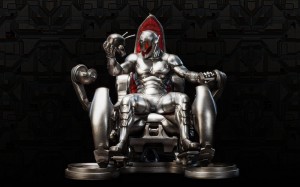 Spader known for his roles on The Practice, Boston Legal, and The Office will voice the android who goes evil in the next installment of the Avengers. It is unknown at this time if Spader will do only the voice or also do motion capture work in the film.

Fans have been speculating that Ultron would be a rouge version of Jarvis, Tony Starks’s artificial intelligence, which helps him control the armors and his lab in the films. Jarvis has be voiced by Paul Bentley in the previous films and it looks like that will continue. How Ultron comes into existence is still a question since he will not be a product of Hank Pym’s work according to reports from the upcoming Ant Man film.