Unfinished Business for X in Issue # 5 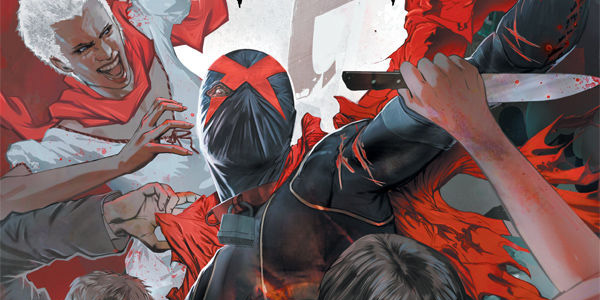 Can a recovering X with Ferguson take on the Acctountant and the Mothers?

We catch up to X after a showdown with Bershire, a crime lord warped by plastic surgery and impervious to physical pain, that he barely escaped alive but recovering. He is awakened by a nightmare to see Ferguson by his side caring for his wounds. She tells him that he needs to take it easy, but X has to finish the mission even his body is giving out, barely able to breathe or stand. 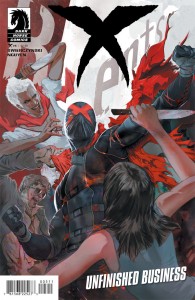 The Accountant and two out of the three Mothers are getting a bite to eat trying to make money and plan revenge on X. The Mothers, out of ideas turn to The Accountant, who shows them Bershire’s payoff book. The book is full of politicians and several other powerful people. They begin their plan with a councilman, using his family as leverage. They are not alone in the office though, a small bug place by X months ago is transmitting to the recovering hero and Ferguson.

The Account goes on his own outing to put the screws to an attorney,Harvey Jerad. Before the Accountant can explain the situation he is interrupted, Jerad’s assistant with a package. The Accountant, after looking in the box, demand to know who delivered it. The messenger is already on her way out, and takes off on her bike trying to get away as fast as possible. The Mother’s and The Accountant head off after, the girl who is revealed to be Ferguson. She is able to lead them to a remote construction site, they try to get the location of X, but our hero arrives just in time and bullets fly.

After the guns are silenced X finds Ferguson alone and bloody. Faced with all this violence can she continue to assist X at the price of her morality?