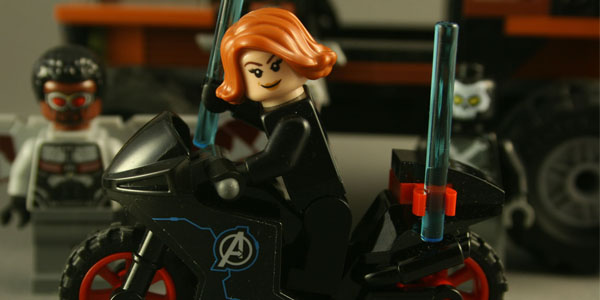 Divided we fall…. but all LEGO fans win with all the new sets for Captain America: Civil War

Three new LEGO sets have hit stores with the main cast from Civil War, and two of them are a lot of fun. I am putting off getting the final set until  get a my next Toys R Us rewards bonus, but I could not pass up these two sets.

The smallest of the sets includes Black Widow and Falcon versus Crossbones. It gives a little hint that Crossbones will be running sone dangerous materials and the Avengers are trying to take him down. This is the first time Falcon and Crossbones are in LEGO form, and make them look cute and badass. Black Widow is new enough to make her worth picking up in the set, and worth keeping in the long run.The other set includes an unmasked Captain America, and all new Black Panther and Winter Soldier. Bucky was hard to find during the last Cap film because he was a polybag exclusive, but now he is available to everyone. The top of the Black Panther head looks slightly awkward, but overall he is one of the best figures of both sets. There are times when the same minifigures get used over and over, just look at Batman and Spider-man, but in this case there are minor changes that make each of the figures in these two sets worth holding onto.

Included in the sets have two jeeps, two bikes, and the jet. The Widow bike uses the larger body giving her the coolest bike of all the Avengers. Of all the the builds for both sets the standout is the Panther Jet. The purple and black on the jet make it stealth and sleek. I have built a lot of jets and vehicles, and although there were some tricky parts to the wings, but it all came together.

The airport battle set will be on my short list of sets to pick up, but with so many repeat figures, it might be a while. These two are both worth grabbing if you are looking for fun builds and love superheroes, and if you have to choose between these and the Batman V. Superman sets, pick these.