Usagi Yojimbo’s Return To Playmates’ TMNT Is A Triumph 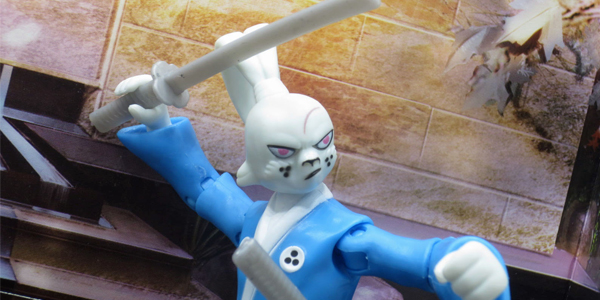 I love Usagi Yojimbo. That statement is not hyperbole; Stan Sakai’s long-running comic book epic centering on a rabbit samurai in an anthropomorphic version of feudal Japan is my all time favorite comic series, and one of the unsung great novels of the modern era.  So when I found out the Rabbit Ronin would be making an appearance in Nickelodeon’s Teenage Mutant Ninja Turtles animated series– not uncommon, considering the frequency of crossovers between these indie comic franchises in years past– my interest was piqued.

But when I saw Playmates Toys’ new Usagi Yojimbo action figure, I was more than intrigued… I was thrilled.  Usagi’s appearance in the latest iteration of the Ninja Turtles borrows heavily from his classic comic book look, and Playmates’ first Usagi action figure captures Stan Sakai’s artwork brilliantly.  From the facial expression, to the flow of his gi, to the twin swords and rabbit’s paw sigils on his chest, everything about this Usagi action figure is perfect.

The figure is well articulated, with a nice range in the ball jointed neck, ball shoulders and hips, hinged elbows and knees, and swivels at the wrists and ankles.  It allows for a solid range of motion, an increasingly frequent (and welcome!) trend in Playmates TMNT toys.  Paint is typically a weak point with this series, but while Usagi’s apps are limited– many of his parts are simply cast in color appropriate plastic– what we do get is precise, be it the freckles on Usagi’s cheeks or the aforementioned sigils. 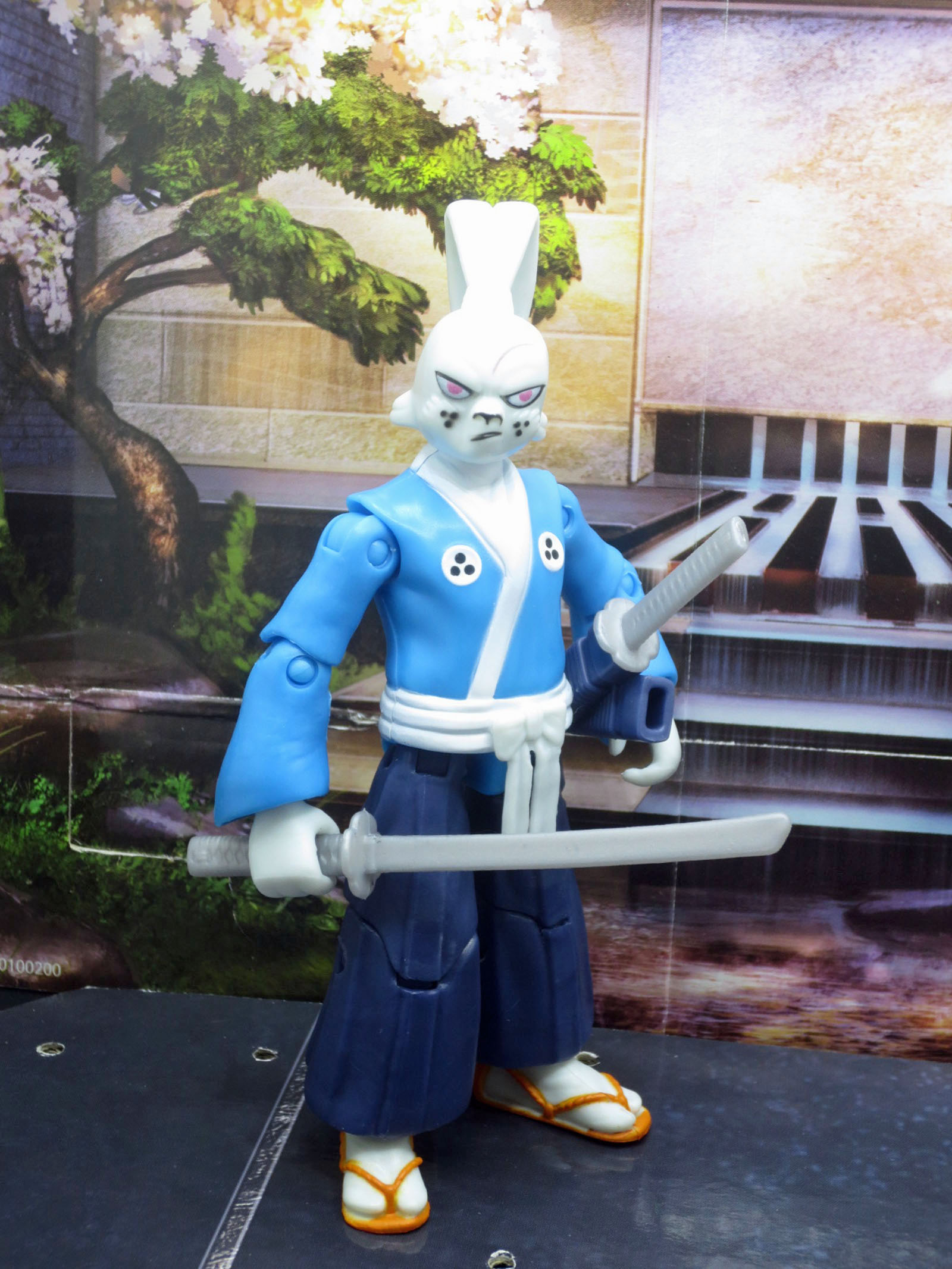 If the figure suffers one drawback, it’s the strange omission of a proper lower torso; Usagi’s tunic overlays the lower part of his midsection, and the figure simply employs this drape in lieu of a typical crotch piece, making him look a bit odd from certain angles.  But overall, he looks great, and you can get him into many poses, ranging from action-ready to stoic and badass, with ease.

Usagi is shipping in the current wave of “Tales of the Teenage Mutant Ninja Turtles” action figures, along with Samurai armored variants of Leonardo, Michelangelo, and Raphael.  They should soon be joined by an armored Usagi, Donatello, and– if we’re really lucky– the mysterious Jei figure who appeared at UK Toy Fair but failed to make the display at New York Toy Fair in February.

This Usagi alone would be an amazing addition to both the current TMNT toy line, and a boon to any Usagi Yojimbo collectors out there… but the fact that there are even MORE promising versions of the Ronin making their way to market shortly, mean this is truly feels like a golden age of Usagi… thanks to Nickelodeon and Playmates. 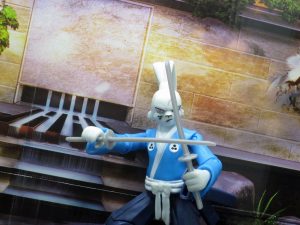 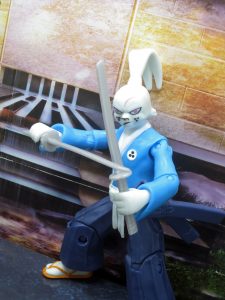 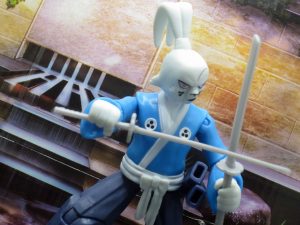 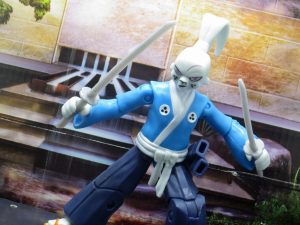 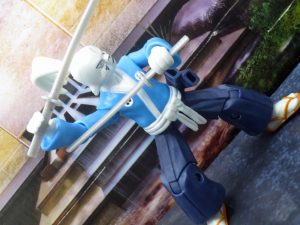 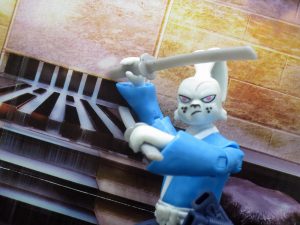 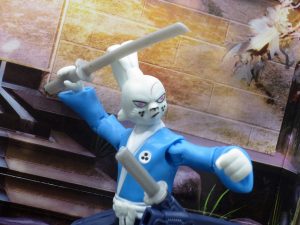 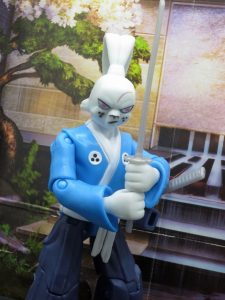 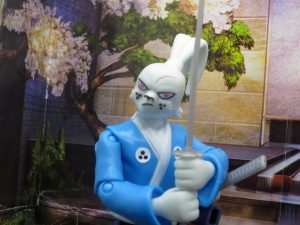 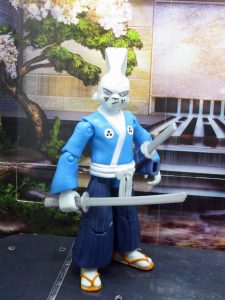 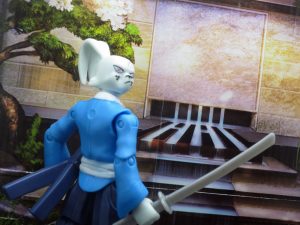 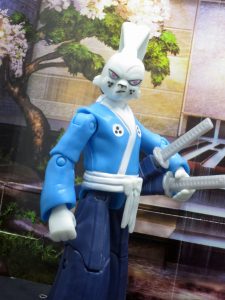 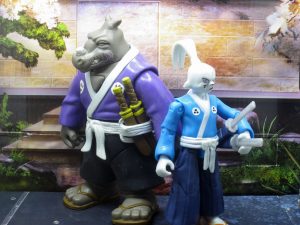 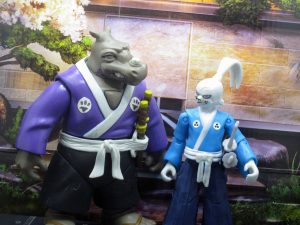 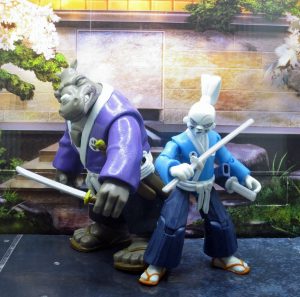 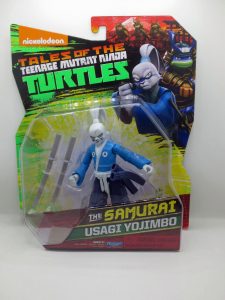 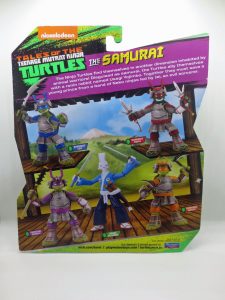