The New Vacation Finally Gets a Trailer! 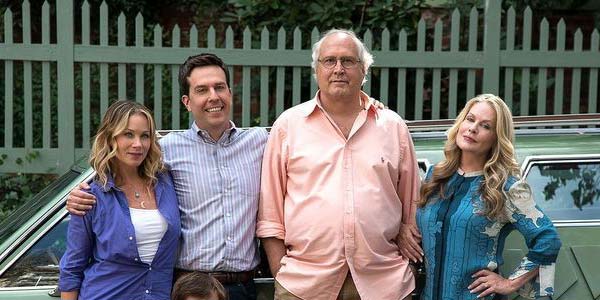 Here’s our first look at the next generation of Griswold family road trips.

The new Vacation movie is coming out in a little more than two months, and we finally have a first trailer! The film straddles the line between sequel and reboot– we follow Ed Helms’ grown up Rusty Griswold, as he takes his family on a trip to Wally World, an attempt to recapture the magic of his favorite vacation when he was a kid. Based on this trailer, I like the concept.

There’s a diverse lot of jokes and gags in this video, quite a bit of which is pretty raunchy… the raw sewage swim didn’t do much for me, but Rusty’s explanation of what a rimjob is had the same obtuse know-it-all attitude that made Chevy Chase’s Clark such a memorable character. Chris Hemsworth and his giant dong promises to be a show-stealer, and even the meta jokes– the bit about how this family’s vacation will stand on its own even if the kids aren’t familiar with the original vacation to Wally World– made me laugh. The punchline at the end, a twist on the classic Christie Brinkley scene, was also a bit of inspired silliness.

I think the key to this movie will be finding the right balance of nods to the original movie, while not being beholden to that story. That’s why I liked the raunchier angle of much of the humor… it feels unique. There’s a lot of references to the first film in this trailer, too, but it all makes some amount of sense. If we get another dead gramndma, or if one of cousin Eddie’s brood become a new burdensome relative, THAT would be pushing it… but I like the callbakcks we get here.

I’ve heard some concerns over casting Helms as Rusty, who was always portrayed as a smartass, and sharper than his dad in the previous movies. I think it’s cool that as Rusty grows up, he loses a bit of that edge and becomes somebody much closer to his father. That feels right to me, and plays into the notion of history repeating itself. What I do want to see is some of that sarcastic Griswold smart-assery– the kind which Clark and Rusty both used with surgical precision– to be a part of his adult character. We don’t see any of that in the trailer, but I really hope we do in the movie.