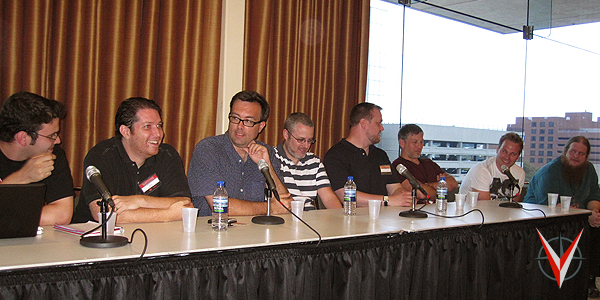 Valiant’s panel at Baltimore Comic Con was the place to be for big announcements and sheer fan enthusiasm.  In attendance were (from left to right) Marketing & Communications Manager Hunter Gorinson, Executive Editor Warren Simons, Writer of Archer & Armstrong Fred Van Lente, Writer of X-O Manowar Robert Venditti, Writer of Bloodshot Duane Swierczynski, Writer of Harbinger Josh Dysart, X-O Manowar Artist Cary Nord, and Writer of the upcoming Shadowman, Justin Jordan.  After some quick introductions, each writer had a chance to discuss what the future holds for their books.

Dysart was first up and, while the projection screen lit up with the Mico Suayan’s amazing cover art for issues 6-8, he discussed the escalating relationship between Toyo Harada and Peter Stanchek and advised that, “by the time #5 is over, Peter and Harada will not be friends.”  Kris, Peter’s love interest, will be featured prominently in issue #6 and, according to Dysart, we will see their relationship come full circle.  Classic characters, and members of the Harbinger Resistance, Flamingo and Torque will also be introduced soon — there was a certain excitement around him mentioning these characters and it sounds like there are some really special things in store for them.  Finally, Dysart was pleased to announce that Faith Herbert (aka Zephyr) will begin playing a very pivotal role in the series’ near future, describing her as “the heart and soul of the book” and “the most aptly named character in comics.”  Look for Zephyr to get her own storyline in Harbinger #9. 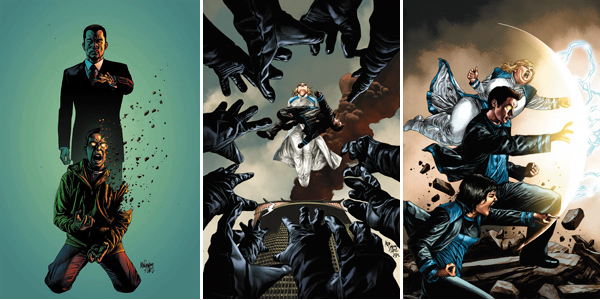 Moving on to Bloodshot, Duane Swierczynski delivered a brief statement while addressing the upcoming story arc, which involves the assault on Project Rising Spirit — the group responsible, as far as we know, for Bloodshot’s creation and some rather insidious experimentation.  As we were shown the covers of issues 4-6 (including a particularly awesome looking variant of #6 by Trevor Hairsine), Swierczynski advised that, in issue #6, a very large secret in the Valiant Universe comes to light which will have “massive repercussions” and long-lasting effects.  What the reveal is could be anyone’s guess, but it left the room more excited than ever for what the future of the series holds. 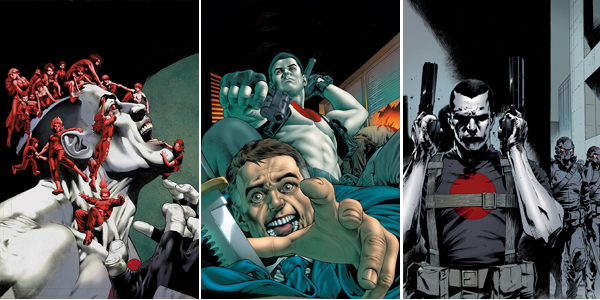 Next, X-O Manowar’s creative team got to touch on their book.  Writer Robert Venditti first commented that he is very pleased with how well the book has been received and how thankful he is to the fans that have been picking it up (the first issue is on it’s fourth printing!).  Going forward, he will be exploring the repercussions of Aric’s arrival in modern times as if this were to actually happen in today’s world.  He is, after all, carrying one of the most advanced and dangerous weapons anyone has ever seen.  We will also get to see a proper face-off between Aric and Ninjak, which Venditti is rather excited about, discussing how much he enjoys how the characters contrast each other — one having a very primitive, brute-force mindset in terms of combat and the other being very calculating and using stealth to his advantage. 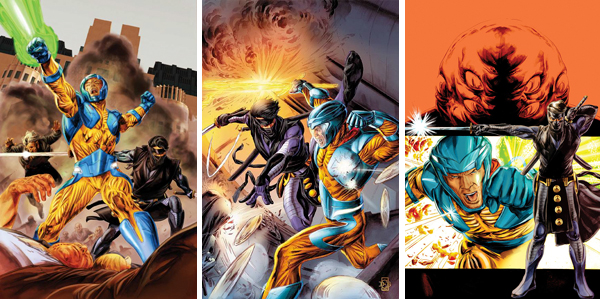 When X-O artist Cary Nord, who will be returning to the book for the next story arc, was asked what his favorite sequence has been to illustrate thus far, he advised that it would probably have to be the first issue’s opening scene.  So epic in terms of scope, he exclaimed that it was probably the most people he’s ever drawn into a single scene and that “a lot of labor and love” went into it.  Although Cary will not be pencilling the story arc that begins this Wednesday, it was announced during the panel that he will be involved in a super-big, super-top secret project due in 2013.  It’s too early to tell what he may be involved in, but seeing Nord pencil virtually any Valiant character will be a treat (here’s hoping for Rai…)  Also in the works is a trade paperback (the first of Valiant’s relaunched material), collecting the first story arc of X-O Manowar, which is due out in December. 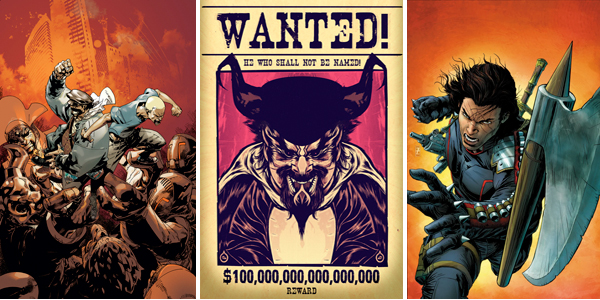 The mic then went to Fred Van Lente, writer of Archer & Armstrong, who is also thrilled with how his book has been received and wants to keep every issue “jam-packed with fun & satire.” One of the biggest announcements of the panel was that, in issue #5, none other than the Eternal Warrior will be returning to the Valiant Universe.  That’s right, Armstrong’s battle-hungry brother, Gilad, will be hitting the pages of Archer & Armstrong and he’ll be fiercely gunning for Obadiah.  We also got a glimpse of the standard Patrick Zircher cover and pullbox Doug Braithwaite cover of December’s A&A #5, showing off Gilad’s slick new look.  Of course, the debut of the Eternal Warrior also means the appearance of the Geomancers and we’ll be seeing a powerful new Geomancer introduced in early 2013.  You can read a bit more on that in our interview with Fred Van Lente (coming this Wednesday!) 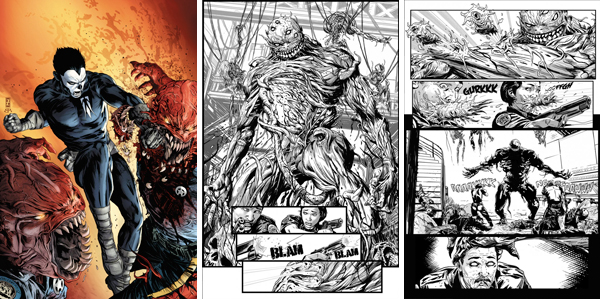 Finally, we also got to hear from Justin Jordan regarding his upcoming take on Shadowman.  While the book centers around Jack Boniface, Jordan (who co-writes the book with artist Patrick Zircher) has incorporated elements from all the different takes of Shadowman over the years while adding their own spin on the series.  Speaking with Justin after the panel, we also discussed the decidedly more supernatural leanings in the relaunch.  In the new series, we will find Jack battling demonic forces and dark magic-wielding baddies more than your run-of-the-mill muggers and common criminals — but it doesn’t feel like so much of a departure from the classic roots as much as a well-designed evolution of what had worked 20 years ago.  Emphasizing the intense action elements of the book (and Justin’s work on “The Strange Talent of Luther Strode” demonstrates his penchant for visceral insanity), Jordan also praised Patrick Zircher’s phenomenal artwork.  Judging by what we’ve seen so far, Shadowman’s creative team is set to knock it out of the park.

The floor then opened up for a Q&A and, as would be expected, there were several questions from longstanding fans as to when we can expect to see H.A.R.D. Corps, Dr. Mirage, Rai, Solar, Magnus, etc, etc, show up in the Valiant Universe.  Warren Simons’ humorous canned response became somewhat of a running gag through the panel, responding only with “well, we love [the character in question]…”  It was a great time shared with passionate fans and a group of some of the most talented creators in the business who clearly love what they do.  With Valiant confirmed to be attending next month’s New York Comic Con, any NYCC attendees would do well to keep an eye out for what they have planned.