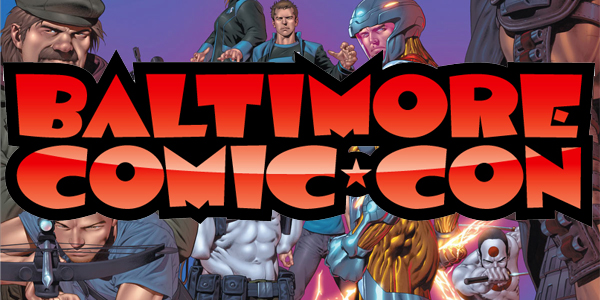 Valiant announced that they’ll be hitting this year’s Baltimore Comic Con in full force and this fanboy couldn’t be happier.  With exclusive giveaways & prizes (including the much sought-after Gold Logo version of X-O #1) and killer merch available, Valiant’s booth is the place to be September 8th & 9th.
Straight from Valiant’s official press release:
“Valiant is proud to announce that it will be making its first appearance at the Baltimore Comic-Con on September 8th and 9th, 2012! All weekend long, Valiant creators and staff will be boothside for a jam-packed slate of convention-only giveaways, signings, portfolio reviews and panel appearances.
“Valiant’s return has been taking the industry by storm this year, and we couldn’t be more proud to have the company and its incredibly talented cast of creators on board for the Baltimore Comic-Con,” said show founder Marc Nathan. “Every attendee should stop by to find out for themselves why Valiant is the publisher that is winning over fans in 2012.”
Stop by the Valiant booth to pick convention exclusive items including Bloodshot #1/Archer & Armstrong #1 double-sided sketch covers and brand new Valiant t-shirts! Plus, no fan will want to miss the FREE “Future of Valiant” Preview Edition, featuring a slew of looks ahead at Valiant’s upcoming fall and winter releases!Then, on Saturday from 2 to 3 pm, get the inside track on the next staggering events that will rock the Valiant Universe at “The Future of Valiant” panel with Robert Venditti & Cary Nord (X-O Manowar), Fred Van Lente (Archer & Armstrong), Justin Jordan (Shadowman), Executive Editor Warren Simons and Chief Creative Officer Dinesh Shamdasani.
Valiant will also be rewarding fans throughout the weekend with its ultra-limited Gold Logo Edition comics. Show your support for the Valiant Universe by dressing up as your favorite Valiant character, or displaying your fandom in a new and unique way, and you might just have a shot at winning a rare X-O Manowar #1 Gold Logo Edition!”