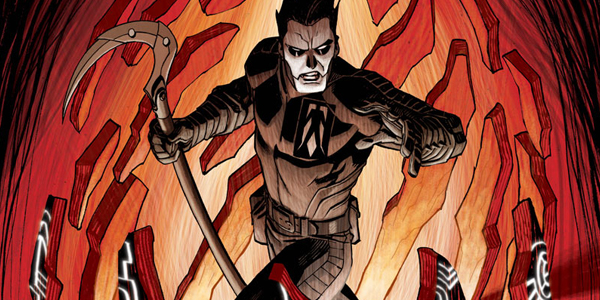 The good people at Valiant have released a sneak peek at the cover art for their upcoming titles this November, including the insanely cool pullbox exclusive and variants for the highly-anticipated first issue of Shadowman.  Take a look at the incredible artwork they’ve put together and tell me you wouldn’t pick these issues up based on the covers alone.
Straight from Valiant’s press release, check out the links for hi-res shots (FYI, they make killer phone wallpapers):
SHADOWMAN #1
Written by JUSTIN JORDAN & PATRICK ZIRCHER
Art by PATRICK ZIRCHER
Cover by PATRICK ZIRCHER
“Blackout” Pullbox Exclusive Variant by PATRICK ZIRCHER
Variant Covers by DAVE JOHNSON and BILL SIENKIEWICZ
The next epic expansion of the Valiant Universe starts this November in a new ongoing series by comics superstar Patrick Zircher (Captain America, Thor: Ages of Thunder) and Harvey Award nominee Justin Jordan (The Strange Talent of Luther Strode, Team 7)!
There’s a million dreams in the Big Easy. But now its worst nightmare is about to come true. As the forces of darkness prepare to claim New Orleans as their own, Jack Boniface must embrace the legacy he was born to uphold. As Shadowman, Jack is about to become the only thing that stands between his city and an army of unspeakable monstrosities from beyond the night. But is the mantle of Shadowman a blessing or a curse? And what is the true cost of his otherworldly power?

The rebirth of a Valiant icon starts right here when Shadowman strikes this November!

Archer & Armstrong make their last stand against The Sect high in the Himalayas!

Every clan of The Sect has gathered together for the first time in millennia to harness the unthinkable, sanity-shattering destruction of the mythical Book. But one piece is still missing – and Obadiah Archer has it! If he turns it over, The Sect will give him back his family. If he refuses, the man called Armstrong dies! PLUS: The true nature of Archer’s powers revealed! AND, on top of everything else, witness the debut of the Valiant Universe’s next superstar hero – only in this issue!

DOWNLOAD: ARCHER & ARMSTRONG #4 Standard Cover
DOWNLOAD: ARCHER & ARMSTRONG #4 Variant Cover
—
BLOODSHOT #5
Written by DUANE SWIERZCYSNKI
Art by MANUEL GARCIA
Cover by ARTURO LOZZI
Variant Cover by MANUEL GARCIA
ALL-NEW ARC! Before Bloodshot, who was Raymond Garrison?
Bloodshot is finally free of the memories that have haunted him since his awakening – but now even greater mysteries remain. Who was he before he was transformed into a walking weapon of mass destruction? And does he have a real family out there somewhere? Unfortunately, the only man with the answers is the former mastermind of Project Rising Spirit, Dr. Emmanuel Kuretich –‑and he’s just struck a devil’s bargain with Bloodshot. “Destroy your creators and I’ll reveal everything.” Well, almost everything…

DOWNLOAD: BLOODSHOT #5 Standard Cover
DOWNLOAD: BLOODSHOT #5 Variant Cover
—
HARBINGER #6
Written by JOSHUA DYSART
Art by PHIL BRIONES
Cover by MICO SUAYAN
Variant Cover by MATTHEW CLARK
ALL-NEW ARC! From out of the ashes – ­RENEGADES!
After a crushing defeat at the hands of his would-be mentor, Peter Stanchek lies critically wounded and the only person who can save him is the person that hates him the most – his childhood love Kris Hathaway. As Harada’s Eggbreaker strike force closes in, the helpless Peter wonders if he is going to find forgiveness at Kris’s door –‑or unbridled vengeance. But when Faith returns as the superhero she’s always dreamed of being, the game is going to change for everyone involved…‑

As the most daring series in comics enters its staggering second act,‑fi nd out why this is the book that Comic Book Resources says “feels new in a way that few comics about characters with superpowers manage these days.”

X-O Manowar vs. Ninjak. To the victor – Earth!

Agents of the alien race known as The Vine have been living in secret among us for centuries and now they’ve just been activated for one final mission – purge the Earth of all human life! An invasion fleet is on its way and the only weapon in existence powerful enough to defeat it is the X-O Manowar armor. But first, Aric of Dacia must survive his latest encounter with Ninjak, the covert operative and master weapons specialist charged with taking him down. The stakes are raised and revelations abound in the latest issue of the smash hit series that has IGN declaring, “This is X-O Manowar done for this generation…and it is awesome.”