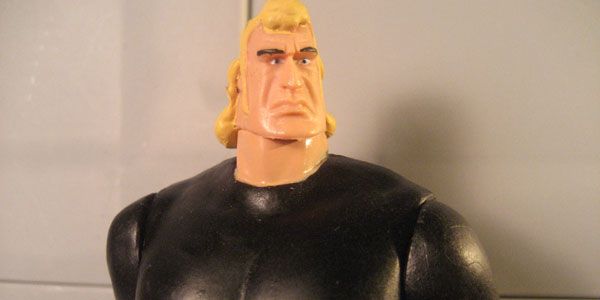 Bif Bang Pow! brings the world of the Venture Bros to a new scale with two versions of Brock Samson making their debut at Comic Con.  The company’s Mego-style Retro figures have split fan reaction, but how does the new 3.75″ scale work out?

It’s been a long road for the 3.75″ Venture Bros toy line.  Bif Bang Pow! first unveiled prototypes including Brock, Hank and Dean Venture and Dr. Mrs. The Monarch at Comic Con 2011, in an effort to drum up fan interest in the toy line so it could move forward.  Preorders were taken through Entertainment Earth, but unless a minimum number of orders was met, the figures simply couldn’t be released. 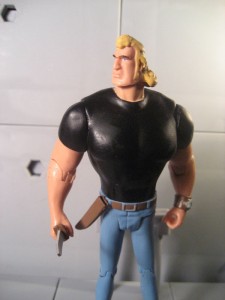 After lots of deadline extensions, and opening preorders through other channels, as of now at least Brock Samson has been officially released, with Hank and Dr. MTM coming later this year and plans for Dean, Doc Venture, The Monarch and Phantom Limb in 2013.  This is awesome news.

What’s also awesome is that the Brock Samson figure is fantastic, and if the rest of the line is this great, I think the 3.75″ scale will work wonders for the Venture universe.

While I love the throwback charm of the retro series, the more traditional action figure styling of the new Brock means he can look much more authentic to the former OIS agent’s on-screen appearance. The sculpt here is amazing, as spot-on an interpretation of the character every bit as good as the Sideshow statue, but at a fraction of the cost. Brock is articulated at the neck, waist, and shoulders, plus t-crotch hips and hinged elbows and knees. While not the most poseable figure on the market, none of the articulation interrupts the excellent cartoon-style sculpting, and the structure works well enough, offering a decent range of poses, especially in the arms.  The figure includes his bowie knife complete with a functional scabbard on his belt, and features a sculpted-on wrist communicator.

All along the retro series featured some amazing headsculpts of the various Venture characters, but this smaller Brock definitely features the best portrait yet, and really looks great from every angle. The harder plastic (in true Mego fashion, the retro heads are hollow PVC) lends itself to great detail such as the small lines that furrow Brock’s forehead, and even his signature mullet gets a dimensionality very similar to his animated design.  And despite Samson’s cartoonish proportions, his slim legs do a great job of supporting his barrel chest and he can balance fairly well.. if BBP! added any articulation to future figures, it should be ankles, as a simple hinge could help greatly in making the figures more stable on their feet. 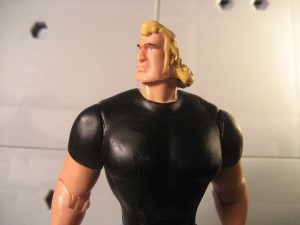 Brock is decked out in his classic look from Season 2 on, with a black t-shirt and jeans. Entertainment Earth sold a variant version of Brock all bloodied up in a white shirt as a Comic Con exclusive, featuring well-done blood spatter paint apps, in the same choppy style seen on the cartoon, which cover much of Samson’s shirt and pants, as well as hands. I wish some stray blood would up on his face as well, just to further differentiate the two figures, and it seems odd that bloody Brock’s knife is clean as a whistle, but other than these minor quibbles, it’s a good variant.

Entertainment Earth premiered both figures at Comic Con, and have since listed both Brocks on their website.  Either one is totally worth picking up, and if you’re a fan of Venture Bros and want to see this awesome new toy line keep moving forward, put your money where your mouth is and order your Brock Samson now! 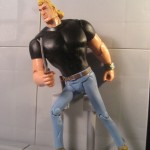 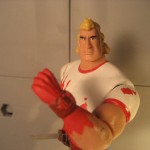 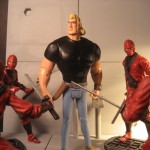 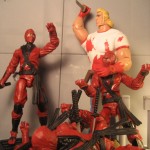 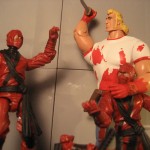 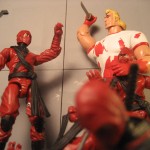