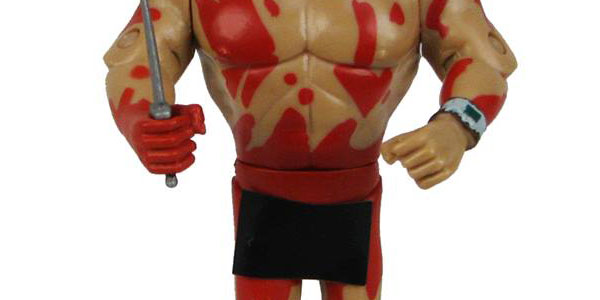 Let’s hope he’s the only one naked at Comic Con :/

This Brock is the latest addition to the quite good 3.75″ Venture Bros series, and he should fit right in, making the rest of you 3.75″ scale toys feel uncomfortable and/ or enticed by his rampant masculinity.*  The figure comes packed on a blister card with art to match the rest of the line, and a piece of black tape over his crotch to censor his probably giant mushroom, complete with a Smurf living in there.*

I love this idea for a Brock variant– it’s equally hilarious and inappropriate, and major props to Bif Bang Pow for walking both that tightrope and getting away with a figure that likely wouldn’t stand a chance in any retail environment.

Here’s a closer look at naked Brock in all his glory, along with some details from Entertainment Earth:

Based on Adult Swim’s animated series The Venture Bros.

You’ll want every one of these fan-demanded Venture Bros. 3 3/4 inch action figures!Entertainment Earth Convention Exclusive! Our incredible follow-up to 2012’s now sold out Bloody Brock Samson action figure! Grab this Naked Brock while you can! The macho secret agent is conspiring to get into your home and your The Venture Bros. collection. Posing as an irresistible articulated action figure from Bif Bang Pow!, Brock Samson stands 3 3/4-inches tall in all his naked and bloody machismo glory. Removable black tape covers his nudity (don’t worry – there is no “junk” behind the tape). Add him to your desk today.

Student of the great Hunter Gathers, former member of the OSI, and current member of SPHINX – Brock Samson is one bad dude. Trained to fight sharks, kill bears, and bed superspy ladies from all over the planet, there’s no better baby sitter in the world. Seriously, that’s a big part of his job!

Bif Bang Pow! presents a truly awesome array of never-before-made 3 3/4-inch action figures based on Adult Swim’s extremely popular animated series The Venture Bros. These fan-demanded figures are crafted of PVC plastic, feature 10 points of articulation, and come with character-specific accessories. You’ll want every one of them in your toy box or Venture Bros. collection.

NOTE: This item will first be sold at San Diego Comic-Con 2013 at the Entertainment Earth Booth #2343. If supplies remain, your order will be filled and shipped to you after the event, during the last week of July 2013. 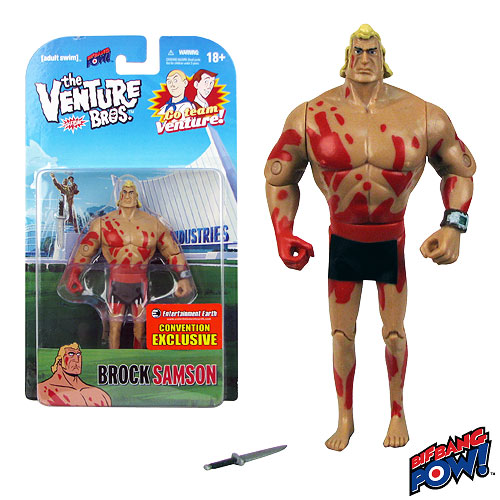 (*not really, I guess… EE admitted Brock features no bits under his black censor tape)