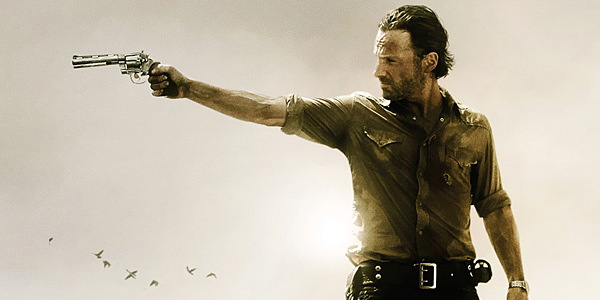 We got some time in with the latest Walking Dead-themed tabletop title – a very light, easy-to-pick-up card game from Cryptozoic that will help you pass the time until the next season airs.

Admittedly, I didn’t really know what to expect from The Walking Dead Card Game.  Having never played 6 Nimmt! by designer Wolfgang Kramer, the game on which this is based, I had only a minimal understanding of the gameplay mechanics and wasn’t sure how the Walking Dead theme would fit in.  The fact is though, while the game isn’t necessarily built around a thematic experience, it’s a quick, fun diversion that you can easily draw a large group of people into.  The first thing that entered my mind when I played this for the first time was that this would be a perfect “line” game for conventions or even something to leave in your car so you always have a fast-playing game on hand if the opportunity arises.  The Walking Dead Card Game is something that, literally, anyone can get into extremely quickly with less than a minute of explanation needed.  Better yet, it plays up to ten people, so it really does work in a large group/party atmosphere.  It can also be set up and put away in seconds as it only consists of cards and a small storage box – no chits, no dice, no other pieces whatsoever. 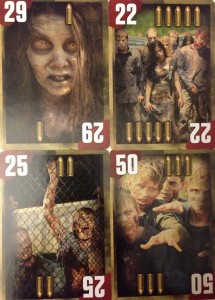 So how do you play it?  Well, there are a couple of ways to play it actually.  “Survivor Mode” is the rule set that closely resembles 6 Nimmt! and plays 3-10 players.  There are a total of 104 cards, numbered sequentially, which are shuffled together.  Ten cards are dealt to each player and four are placed face up in the middle of the play area.  If you are playing with less than ten people, the remaining cards are placed aside, out of the game.  Each player simultaneously selects one card to play from their hand per turn, so the game will always play for ten turns – this way it still plays extremely quickly regardless of the player count.  Once each player selects and places their card face down in front of them, they are all flipped over and placed in ascending order.  The four cards that we placed initially serve as the starting cards for the four rows you will build.  One by one, the cards played each turn are placed (again, in ascending order) to the right of the card with the closest numerical value.  For example, let’s say the four center cards are numbered 36, 48, 66, and 20.  Once everyone has flipped over the card from their hand they wish to play, you have a 55 card and the person next to you played a 49.  The lowest value gets placed first and would sit to the right of the 48 – it is closest to the numerical order and ascending.  Assuming you are next, your 55 would then be put next to the newly placed 49.  Although it is numerically higher than three of the columns, its number is closest to 49.  If you have no cards to play that are a higher number than any of the cards in the center, than you are forced to play one which is a lower value.  You may place this next to any available row and collect every card in that row, making your newly placed lower-number card the new starting card in the row. The collected cards are stacked in front of you and represent walkers that are bearing down on you so, obviously, the object is to collect as few cards as possible.  The other way that you’ll be forced to take cards is, if you are placing a card in a row that already has five cards.  The sixth card that you would have placed also becomes the new row starter and you take all five existing cards.  Once everyone plays everything in their hand, players that were made to take cards will look at them.  Each card has a number of bullets associated with it – you count up the bullets in your stack and the player with the fewest points is the winner.  I enjoyed Survivor Mode and the strategic elements inherent in the design, especially as your hand size begins to decrease.  It was my preferred way to play, however “Hero Mode” may be what draws more people in.

In Hero Mode, 2-6 players are dealt a total of sixteen cards.  Fifteen of these are the numbered cards we discussed in the previous section, while the sixteenth is one of six randomly dealt Hero cards.  Each hero (Maggie, Daryl, Rick, Andrea, Glenn, and T-Dog) serves the same function but offers a photo of that character from the show.  In this variant, players may play one or two cards each turn and are vying to claim as many rows of cards as they can as opposed to avoiding them.  The only way to do this in Hero Mode is by placing the sixth card – playing a card that is a lower denomination than anything in the play area will simply force you to place it to the right of the highest numbered card available.  The interesting mechanic they cooked up for this mode involves your hero card which, when played in conjunction with a numbered card, allows you to place that card first in that turn, regardless of its number value.  This is a good way to snipe some points on a stack that’s already five cards deep.  Once all players have played their cards (and remember, since you can play up to two cards in this mode, more frugal players may still have cards to play after others have already used everything) players would count up the bullets in their score stacks with the highest score claiming victory. 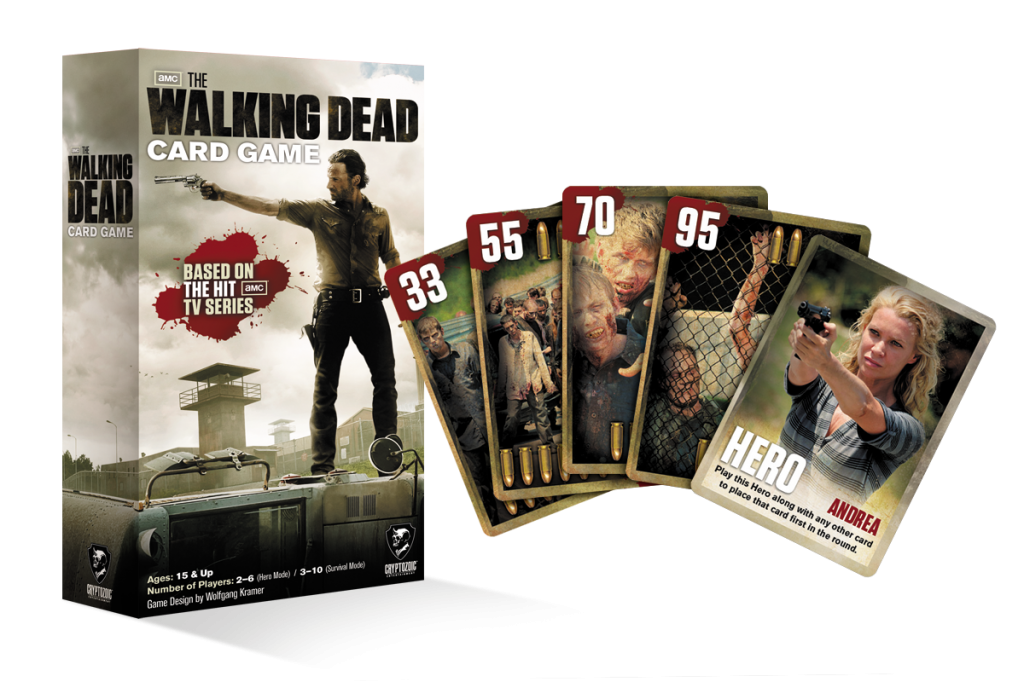 Again, it’s a very simple mechanic and works well as a light, casual card game.  The box recommends it for players who are 15 or older but, really, if you have a kid who doesn’t mind the gruesome artwork, the mechanics present here actually make it an excellent game to play with kids.  There are three different zombie photos used on the numbered cards, all taken from the television show, as well as the six “hero” cards I touched on – making for 110 cards total packaged in a small-ish box for easy storage and transport along with a concise instruction booklet.  The cardstock material is rather nice and the backs of each card share the same killer artwork that’s on the box (you have to admit, that’s a pretty badass photo).  If you’re a fan of the TV show, the Walking Dead Card Game already carries the aesthetic you dig and has a fun, light game to back it up.  And even if you’re critical of the show, you’ll still find yourself having a good time as the theme doesn’t intrude into the actual mechanics.  Look for it at local retailers or on Cryptozoic’s site for an MSRP of $15.