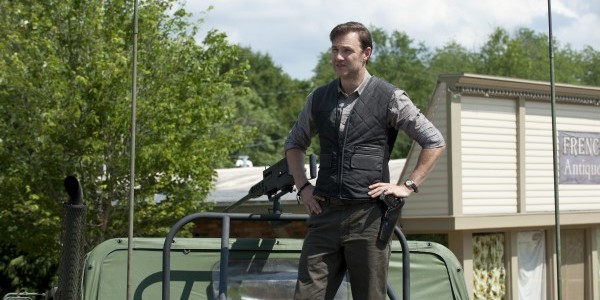 Welcome to Woodbury, population 72…soon to be 73….or maybe 75 if you don’t count the undead members of the town.

This episode was the first one of the series where viewers did not see Rick or our main protagonists for the whole 43 minutes.There was some concern on the creators’ part that this would not work, but it was one of the most compelling hours of the series.

Viewers were shown both the positive and negative sides of the town of Woodbury in “Walk with Me”. In the comics the character of the Governor is drawn more like a character from Sons of Anarchy than the current look of the Governor. This new take on the character masks what is really going on in the leader’s mind. We don’t know much about him but as the season goes on, viewers are likely in for some twists and turns. He also has an uncanny resemblance in both appearance and sound to Liam Neeson

It looks like life is going back to normal in this small town but inside some building and outside the gates the world is going to hell and the Governor is leading the charge. The Governor is not the only new character we learn about– we also get more Michonne, who seemed much softer in the season opener. It was nice to see the writers did not take away her hard edge to make her more audience friendly.

There was also a return, Merle is back and he is sporting redone arm stump, complete with bayonet. Merle seems a bit more reserved now that he is part of Woodbury, but is he just waiting for his moment to take advantage or does he really like his new position in the zombie apocalypse?

In the episode Merle is referenced to as the hammer in the Governor’s tool box.  If he is the hammer then Milton is the scalpel. There is not much know about the new character of Milton, but we can tell he is an educated man who is looking to learn as much as he can about the “biters” as possible. Why do they want to know more? Could it be they are looking to control the zombies as a weapon or are they looking for a cure? Only time will tell.

From the looks of the preview time will be split on the show between Woodbury and the prison on upcoming episodes, but until the two worlds collide it will be a fun ride.