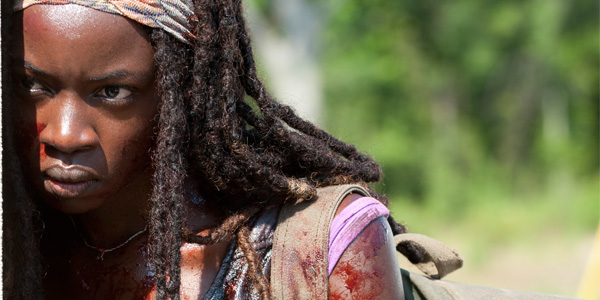 Who would think that going grocery shopping would be dangerous? Well in the zombie apocalypse you have to be ready when stocking up on baby formula to fend off a crazy one handed redneck.

As the first half of the third season starts to come to a close, plot lines are starting to converge.  The population of Woodbury decreased by three this week… not due to walkers or biters, but rather at the hands of fellow survivors. Michonne and Merle shared the body count this week, both killing to further their own survival. Even though Merle lost three of his hunting buddies, the one-handed survivor was able to “recruit” two new survivors to join Woodbury– the captive Glen and Maggie.

Meanwhile back at the prison, Rick was taking phone calls from an unknown source, but by the end of the episode we find out where they’re coming from.The calls were from former survivors who died since Rick joined the group from Atlanta, all calling Rick to join them. Rick’s own mind was either betraying him or helping him cope with the massive amount of stress he has had to handle in the last few weeks.  Whatever it was it is sure to stick with him as the last few episodes of this season play out. For those of us who read the comic we know even darker days are coming for Rick, so more phone calls may be in his future.

We also see a much harder Carl in this episode. During a sweep of the prison, Daryl tries to console Carl by telling him about the loss of his own mother, but instead of accepting the caring words, Carl just responds by telling Daryl how he had to shoot his unturned mother in the head. There is no doubt that Carl will grown into a very hardened person… but will he be more like his father, or the Governor?

Michonne also had a big part in this episode, not only evading Merle’s hunting party, but also finding the prison group all on her own. Playing games with the hunters by setting up a trap using a zombie body part word puzzle was comical. Her appearance at the gates of the prison with formula for the baby at the prison shows she might be realizing she can’t do this all alone and needs to join a group. She is proving with each new episode that the comic badass is possible on an prime-time show.

So will Maggie and Glenn survive a trip to Woodbury? Will Rick take Michonne in? And will the two groups merge or stay separate? Head to the comments to let us know what you think, and check out the sneak peek of next week’s episode of The Walking Dead.