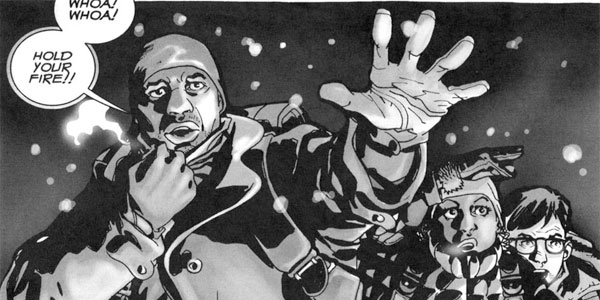 Sorry Iron-E… turns out T-Dog was NOT the TV adaptation of comic mainstay Tyreese.

One of the few main characters from Robert Kirkman’s Walking Dead comic that has yet to surface in the AMC TV show is Tyreese.  The survivor was one of the earlier additions to the group in the pages of the comic, but his lack of presence on the show made many fans think he wouldn’t be coming, possibly having been (liberally) adapted into either the late T-Dog or Daryl Dixon.

But now it looks like Tyreese will be making his small-screen debut, as played by the excellent Chad Coleman (The Wire‘s Cutty).  There’s always been a big variance between the caliber of actors in The Walking Dead‘s cast, and Coleman clearly falls onto the “better” side of that.  While I’m hopeful that he’ll bring the same depth and interesting character moments that the best players like Norman Reedus’ Daryl and Jon Bernthal’s Shane have in the past, we shouldn’t forget that Jeffrey DeMunn (the insufferable Dale) is also a fantastic actor, when not on this show.

TV Guide broke the news about Coleman’s new role, and reports that Tyreese should be showing up in the mid-season finale a few weeks from now.  I think Coleman is a good choice for the role, although I’m kind of curious how having Tyreese show up so much later in the plotline will impact his character.  The comic version of the character showed up long before Rick started going nuts, and served as the deputy’s loyal and decent lieutenant for most of his tenure.  With Rick already clearly losing it, and Daryl serving as Grimes’ right hand, I’m interested to see how Tyreese will fit into the TV universe.